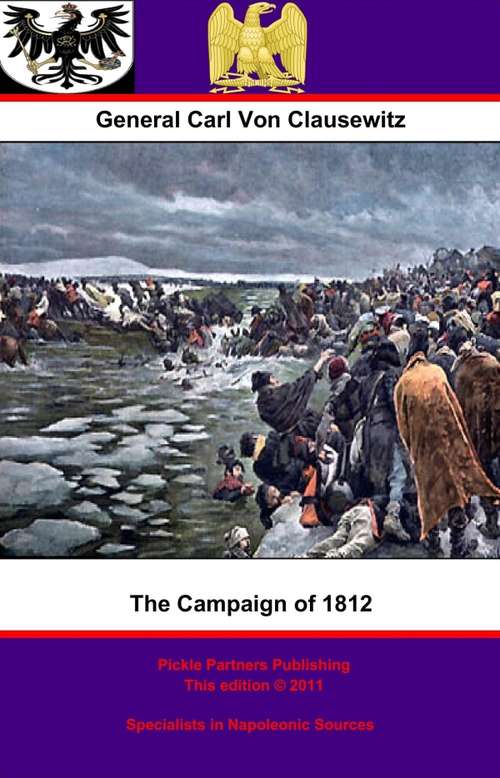 Carl von Clausewitz needs little introduction. A Prussian soldier of distinction during the Napoleonic Wars, he served in 1806 during the disastrous Jena campaign, which led to dismemberment and occupation of his homeland. He later transferred to the Russian service in 1812 and, like many of his fellow Prussian officers, participated in the campaign that broke the Grande Armée. After further service in Prussian ranks during 1814 and 1815, he took over as head of the Prussian Staff College, or Kriegsakademie, and began writing his monumental work on the theory of conflict. The first three volumes of his posthumous publication was Vom Kriege, which has become hugely famous and is known under the title "On War" in English. The other volumes mainly formed discussion and critique of the recent campaigns against the French forces, such as Napoleon's Italian campaign in 1796, and also those that Clausewitz took part in, such as the 1812 campaign in Russia.

"The Campaign of 1812" is the translation of his experiences whilst serving in the Russian ranks throughout 1812, as the hordes of French and allied troops invaded. He combines his own recollections with criticism on the characters and decisions of the Generals around him; this can sometimes be rather cutting and scathing toward Generals who were directing the Russian war effort. He also dissects the movement of the French forces and gives ample reasoning for the disastrous outcome of the campaign, attributing a great part of it to the faulty plans and insufficient forethought of Napoleon.

A brilliant excerpt of the writings of an acknowledged military genius of great penetration and insight.

Illustrations - 1 Map not reproduced due to its size.