Abyssal Channels in the Atlantic Ocean 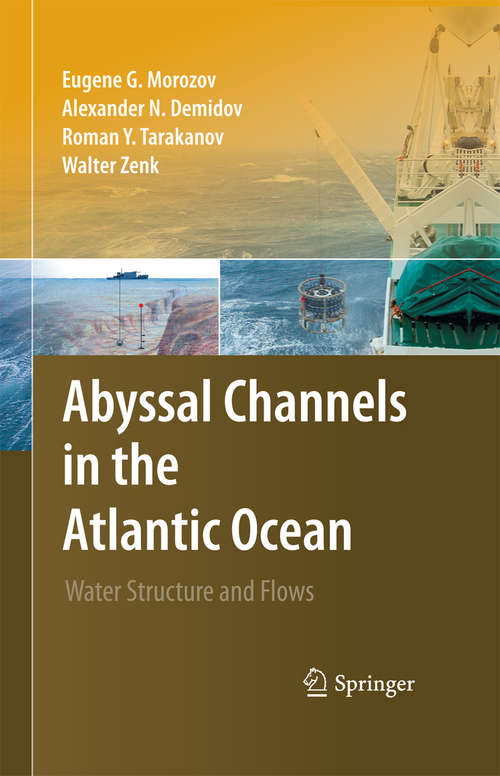 This book is dedicated to the study of structure and transport of deep and bottom waters through underwater channels of the Atlantic Ocean. The study is based on recent observations, analysis of historical data, and literature review.

A strong flow of Antarctic Bottom Water from the Argentine Basin to the Brazil Basin through the Vema Channel (32 -27 S) is studied on the basis of CTD sections combined with LADCP profiling carried out annually and long-term moored measurements. The flow in the Vema Channel is mixed in the vertical direction but horizontally stratified. The mean speed of the flow is 30 cm/s and water transport is approximately 3.5 Sv. Owing to the bottom Ekman friction the dense core of the flow is usually displaced to the eastern wall of the channel. A temperature increase was found in the deep Vema Channel, which has been observed for 30 years already.

The further flow of bottom water in the Brazil Basin splits in the northern part of the basin. Part of water flows to the East Atlantic basins through the Romanche and Chain fracture zones. The other part is a northwestern flow to the North American Basin. Part of the northwesterly flow propagates through the Vema Fracture Zone (11 N) into the Northeastern Atlantic basins.

Flows in the Romanche, Chain, and Vema fracture zones were studied recently by CTD and LADCP profiling. An underwater cataract was found in the Chain Fracture Zone. Recent measurements in the Kane Gap show that the flow of bottom water there is characterized by alternative transport in time. The Northeastern Atlantic basins are filled with the bottom water flowing through the Vema Fracture Zone. The flows of bottom waters through the Romanche and Chain fracture zones do not spread to the Northeast Atlantic due to strong mixing in the equatorial zone and enhanced transformation of bottom water properties.

Extra material: The CTD data sets collected in abyssal channels of the Atlantic Ocean can be downloaded from http://extras.springer.com. The access to the data is organized either by means of a clickable map or tables. Investigators can download individual casts organized by the year of the experiment or its location. The CTD data are organized in the form of a heading and three columns (pressure, temperature, salinity). The style is similar to the WOCE format. A line with coordinates is added to the heading.