It Came From Within! The Shocking Truth of What Lurks in the Heart 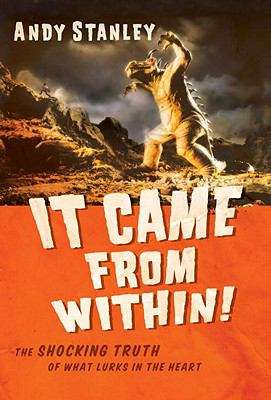 Where Did THAT Come From? You know that dreaded, sinking, I-can't-believe-I-said-that-out-loud feeling? It's a disconnect between your attitude and your actions. Or is it? "For out of the overflow of the heart the mouth speaks," states Matthew 12:33. Scary, but true: The words you "accidentally" speak and the actions you later regret are actually in keeping with what's hiding in your heart. Andy Stanley's life-changing message examines four conditions at the root of sour attitudes, hurting relationships, and regretful actions: guilt, anger, greed, and jealousy. This book will help you disclose the true state of your heart and turn what'sterrifyinginto what'sterrific. You Can't Run from What Lurks Within More frightening than Frankenstein. More seductive than a vampire's kiss. More destructive than alien invaders from another planet. They will numb your soul, steal your life, and threaten your most treasured relationships. Who are these creatures? Where do they come from? At the fall of mankind they were unleashed on the world, wreaking havoc and sending countless thousands fleeing from their homes. And their lair is found in the last place anyone wants to look - the mysterious depths of the human heart. Youthinknobody knows the real you. Youthinkyour secret is safe. Beware! These forces gain strength from darkness. And left to their own, they will grow in power and influence, like a lab experiment gone terribly wrong. But these monsters have a weakness. Theycanbe defeated. You can escape their clutches and be forever free of their influence. Learn the truth-before it's too late! Are you afraid to look inside? Suddenlya young wife files for divorce. Suddenlya college student's grades drop and his attitude changes. Suddenlya man's harmless pastime becomes a destructive habit. Each looks for someone else to blame. But the real enemy lurks within. Each of these people is a victim, but not in the way they might think. An invader, a deadly parasite, has wrapped its powerful, controlling tentacles around each victim'sheart. The heart. Not the organ that pumps blood through our veins, but that invisible, intangible place where we experience love, compassion, contempt, and jealousy. Like the physical heart, this other heart is highly susceptible to attack-by four nightmarish foes, in particular. Four malevolent forces that, left unchallenged, have the power to lay waste our homes, trample our careers, and leave our relationships in fiery ruins. But hope is not lost. There is a way to fight back. In this smart, revealing book, you will be introduced to these four invaders of the heart. More importantly, you will be given four weapons designed specifically to destroy them. Writing with deep honesty and gentle humor, Andy Stanley shows how you can overcome these monsters and save your world, starting now. Story Behind the Book Andy Stanley is the senior pastor of three North Point Ministries campuses with a cumulative congregation of more than twenty thousand. In his role he sees a tremendous number of people struggling with the same basic issues. This book is based on a message he spoke to his congregation to help them better understand, work through, and move beyond the problems caused by a hurting heart. From the Hardcover edition.