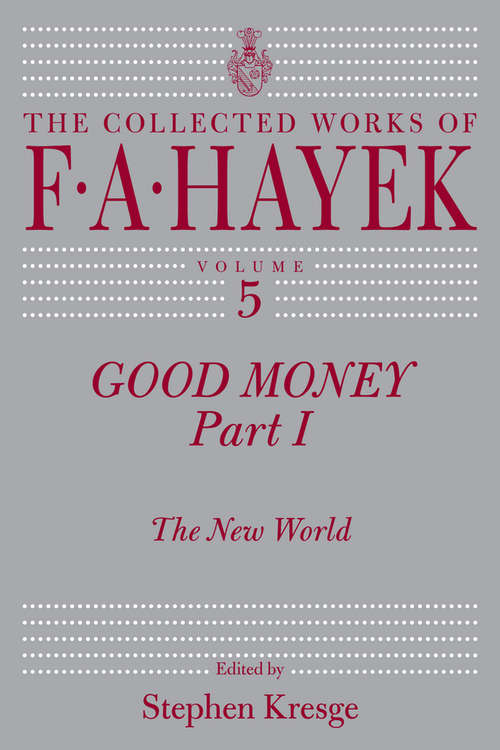 By: F. A. Hayek • Stephen Kresge
Login
Sign Up

The two volumes of Good Money concentrate on Hayek's work on money and monetary policy. Published in the centenary of his birth, these volumes bring forth some of the economist's most distinguished articles on monetary policy and offer another vital addition to the collection of Hayek's life work.

Good Money, Part I: The New World includes seven of Hayek's articles from the 1920s that were written largely in reaction to the work of Irving Fisher and W. C. Mitchell. Hayek encountered Fisher's work on the quantity theory of money and Mitchell's studies on business cycles during a U.S. visit in 1923-24. These articles attack the idea that price stabilization was consistent with the stabilization of foreign exchange and foreshadow Hayek's general critique that the whole of an economy is not simply the sum of its parts.

Good Money, Part II: The Standard offers five more of Hayek's articles that advance his ideas about money. In these essays, Hayek investigates the consequences of the "predicament of composition." This principle works on the premise that the entire society cannot simultaneously increase liquidity by selling property or services for cash. This analysis led Hayek to make what was perhaps his most controversial proposal: that governments should be denied a monopoly on the coining of money.

Taken together, these volumes present a comprehensive chronicle of Hayek's writings on monetary policy and offer readers an invaluable reference to some of his most profound thoughts about money.

"Intellectually [Hayek] towers like a giant oak in a forest of saplings."—Chicago Tribune

"One of the great thinkers of our age who . . . revolutionized the world's intellectual and political life."—Former President George Herbert Walker Bush