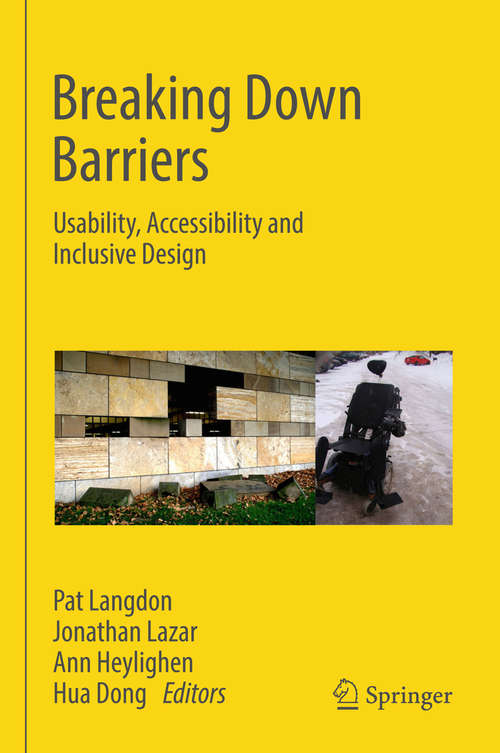 The Cambridge Workshops on Universal Access and Assistive Technology (CWUAAT) is one of the few gatherings where people interested in inclusive design, across different fields, including designers, computer scientists, engineers, architects, ergonomists, ethnographers, policymakers and user communities, meet, discuss, and collaborate. CWUAAT has also become an international workshop, representing diverse cultures including Portugal, Germany, Trinidad and Tobago, Canada, Australia, China, Norway, USA, Belgium, UK, and many more. The workshop has five main themes based on barriers identified in the developing field of design for inclusion: I Breaking Down Barriers between Disciplines II Breaking Down Barriers between Users, Designers and Developers III Removing Barriers to Usability, Accessibility and Inclusive Design IV Breaking Down Barriers between People with Impairments and Those without V Breaking Down Barriers between Research and Policy-making In the context of developing demographic changes leading to greater numbers of older people and people living with impairments, the general field of inclusive design research strives to relate the capabilities of the population to the design of products, services, and spaces. CWUAAT has always had a successful multidisciplinary focus, but if genuine transdisciplinary fields are to evolve from this, the final barriers to integrated research must be identified and characterised. Only then will benefits be realised in an inclusive society. Barriers do not arise from impairments themselves, but instead, are erected by humans, who often have not considered a greater variation in sensory, cognitive and physical user capabilities. Barriers are not only technical or architectural, but they also exist between different communities of professionals. Our continual goal with the CWUAAT workshop series is to break down barriers in technical, physical, and architectural design, as well as barriers between different professional communities.