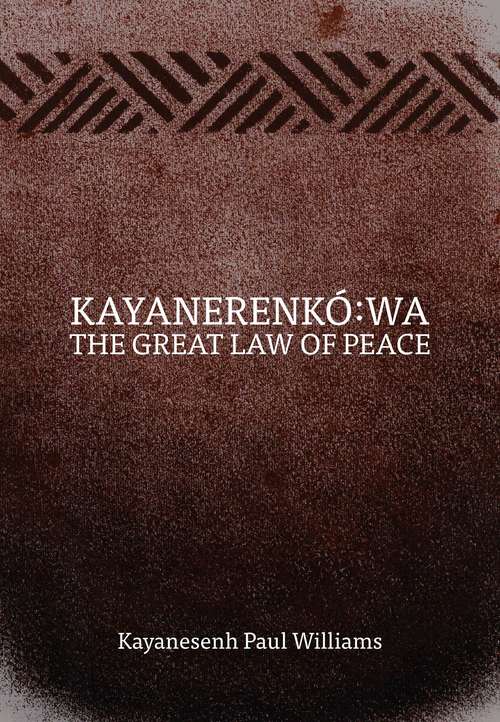 Several centuries ago, the five nations that would become the Haudenosaunee — Mohawk, Oneida, Onondaga, Cayuga, and Seneca — were locked in generations-long cycles of bloodshed. When they established Kayanerenkó:wa, the Great Law of Peace, they not only resolved intractable coinflicts, but also shaped a system of law and government that would maintain peace for generations to come.

This law remains in place today in Haudenosaunee communities: an Indigenous legal system, distinctive, complex, and principled. It is not only a survivor, but a viable alternative to Euro-American systems of law. With its emphasis on lasting relationships, respect for the natural world, building consensus, and on making and maintaining peace, it stands in contrast to legal systems based on property, resource exploitation, and majority rule.

Although Kayanerenkó:wa has been studied by anthropologists, linguists, and historians, it has not been the subject of legal scholarship. There are few texts to which judges, lawyers, researchers, or academics may refer for any understanding of specific Indigenous legal systems. Following the United Nations Declaration on the Rights of Indigenous Peoples, and a growing emphasis on reconciliation, Indigenous legal systems are increasingly relevant to the evolution of law and society.

In Kayanerenkó:wa Great Law of Peace Kayanesenh Paul Williams, counsel to Indigenous nations for forty years, with a law practice based in the Grand River Territory of the Six Nations, brings the sum of his experience and expertise to this analysis of Kayanerenkó:wa as a living, principled legal system. In doing so, he puts a powerful tool in the hands of Indigenous and settler communities.