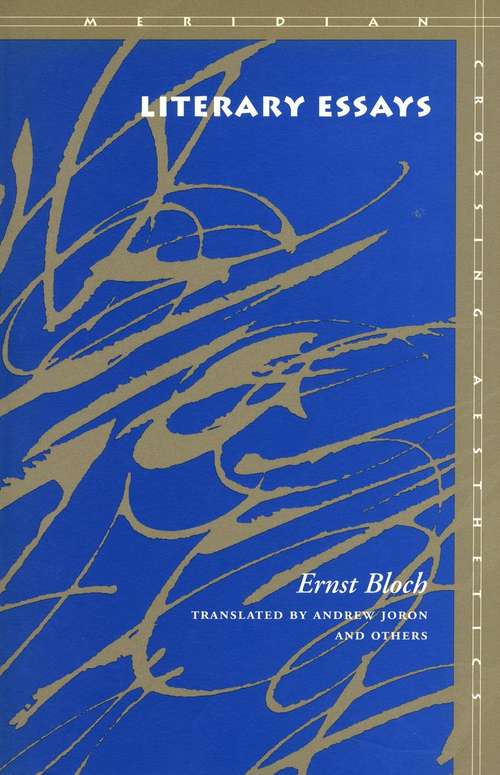 The writings of Ernst Bloch represent one of the lasting linguistic and intellectual achievements of German expressionism. In them one finds a pathos and urgency, a spirit of breaking away and a projection toward a new way of seeing, thinking, and living together that has its origins in the artistic and intellectual unrest of this century's second decade.

Bloch's literary essays are not, strictly speaking, "theoretical" pieces, certainly not applications to literature of some pre-existing conceptual apparatus. Collectively they represent a field of experiment in which a thinker of astonishing originality exposes his thought to the provocation of literary, musical, and artistic works, but also to such phenomena as advertisements, landscapes, clichés and obsessive images, films, and forms of interaction in country and city. What is the function of musical accompaniment in a silent film? How does a writer's birthplace imprint itself on his intellect? What is the philosophical import of the detective novel? Why is anxiety more acute when its stimulus is aural rather than visual? What is the relation between modern art and the machinery of factory production? Such are the questions encountered here. Seldom is writing less automatic, willing to take more risks, and, quite simply, so fresh and refreshingly new.

The pieces gathered here, which date from 1913 to 1964, are held together by Bloch's view of the human as being always beyond itself, as anticipating itself and never positively there. This thrust beyond the horizon of positivity expresses itself in wishes, hopes, fantasies, dreams, imaginative creations, and utopian projects. Bloch s attention is always, and in the most diverse gestures, works, and productions, alert to the energies of political transcendence.

Derechos de autor:
1998 Board of Trustees of the Leland Stanford Junior University