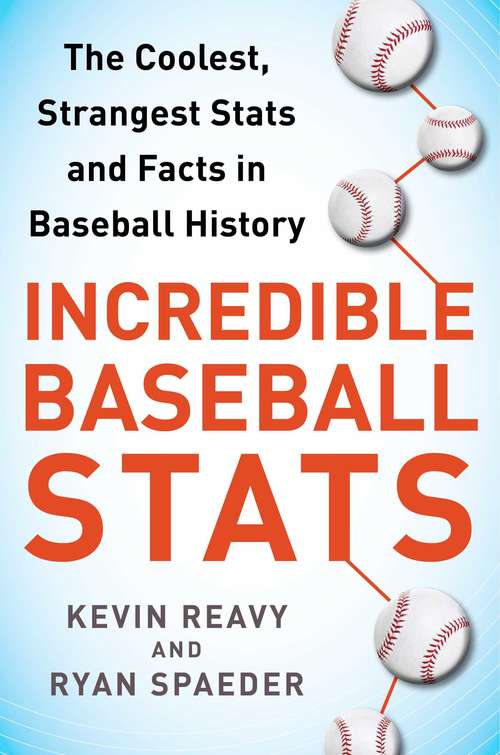 As America's pastime since the mid-1800s, baseball offers the sights, sounds, and even smells that are deeply entrenched in our culture. But for some, the experience can be less sensory. Some, such as Ryan Spaeder and Kevin Reavy, live for baseball statistics. Stats give the game historical context and measurables for past, present, and predictive analysis.Incredible Baseball Stats helps tell unique baseball stories, showcasing extraordinary stats and facts in baseball history, through the 2015 season. For example, in 2015, the Nationals’ Bryce Harper broke out in a major way. He batted .330/.460/.649 with 42 home runs en route to his first MVP Award. It was his fourth MLB season, but he was still younger than NL Rookie of the Year Kris Bryant. He became the youngest player to lead the league in both on-base percentage and homers in the same season since Ty Cobb in 1909. Through 2015, he has a career .902 OPS (143 OPS+), the same OPS and adjusted OPS that Henry Aaron had through his first four seasons—and Hammerin’ Hank was nearly a year older!The authors have scoured the records for untold tales and looked at familiar ones with new statistical insights, to create Incredible Baseball Stats, a perfect book for baseball fans from coast to coast.Skyhorse Publishing, as well as our Sports Publishing imprint, are proud to publish a broad range of books for readers interested in sports-books about baseball, pro football, college football, pro and college basketball, hockey, or soccer, we have a book about your sport or your team.Whether you are a New York Yankees fan or hail from Red Sox nation; whether you are a die-hard Green Bay Packers or Dallas Cowboys fan; whether you root for the Kentucky Wildcats, Louisville Cardinals, UCLA Bruins, or Kansas Jayhawks; whether you route for the Boston Bruins, Toronto Maple Leafs, Montreal Canadiens, or Los Angeles Kings; we have a book for you. While not every title we publish becomes a New York Times bestseller or a national bestseller, we are committed to publishing books on subjects that are sometimes overlooked by other publishers and to authors whose work might not otherwise find a home.