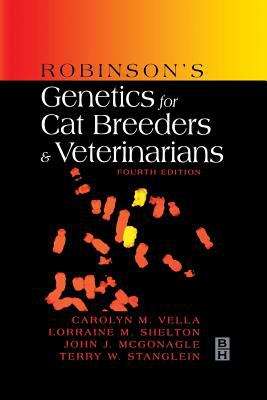 The field of genetics has changed considerably since the first edition of Genetics for Cat Breeders was published in 1971. For decades the discussion of genetics was limited to observations of populations but now geneticists are beginning to look at the actual molecular mechanisms behind the traits and diseases seen in the cat.

Continuing the pioneering work of the late Roy Robinson, Carolyn Vella and her team of experts have significantly expanded the scope of previous editions to produce a work which is now of equal benefit to both veterinary surgeons and cat breeders. Their aim has been to make the book more accessible and understandable whilst providing an impartial look at sometimes controversial and complex issues.

The book retains the most important information published in previous editions and also incorporates some of the continuing work done by Roy Robinson prior to his death. A considerable amount of new information has been added in order to provide both breeders and veterinarians with the broadest possible range of information. The authors have not only reviewed the traditional sources of scientific literature and recently published studies, but have also conducted interviews with veterinarians, researchers and breeders.

The authorship now includes a practicing veterinarian as well as experienced cat breeders, thus making this new edition useful at both veterinary and breeder levels