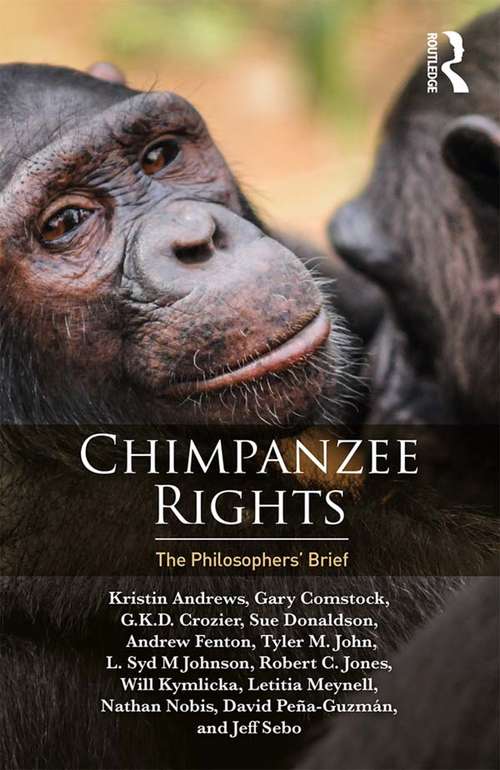 Since 2013, an organization called the Nonhuman Rights Project has brought before the New York State courts an unusual request—asking for habeas corpus hearings to determine whether Kiko and Tommy, two captive chimpanzees, should be considered legal persons with the fundamental right to bodily liberty.

While the courts have agreed that chimpanzees share emotional, behavioural, and cognitive similarities with humans, they have denied that chimpanzees are persons on superficial and sometimes conflicting grounds. Consequently, Kiko and Tommy remain confined as legal "things" with no rights. The major moral and legal question remains unanswered: are chimpanzees mere "things", as the law currently sees them, or can they be "persons" possessing fundamental rights?

In Chimpanzee Rights: The Philosophers’ Brief, a group of renowned philosophers considers these questions. Carefully and clearly, they examine the four lines of reasoning the courts have used to deny chimpanzee personhood: species, contract, community, and capacities. None of these, they argue, merits disqualifying chimpanzees from personhood. The authors conclude that when judges face the choice between seeing Kiko and Tommy as things and seeing them as persons—the only options under current law—they should conclude that Kiko and Tommy are persons who should therefore be protected from unlawful confinement "in keeping with the best philosophical standards of rational judgment and ethical standards of justice."

Chimpanzee Rights: The Philosophers’ Brief—an extended version of the amicus brief submitted to the New York Court of Appeals in Kiko’s and Tommy’s cases—goes to the heart of fundamental issues concerning animal rights, personhood, and the question of human and nonhuman nature. It is essential reading for anyone interested in these issues.