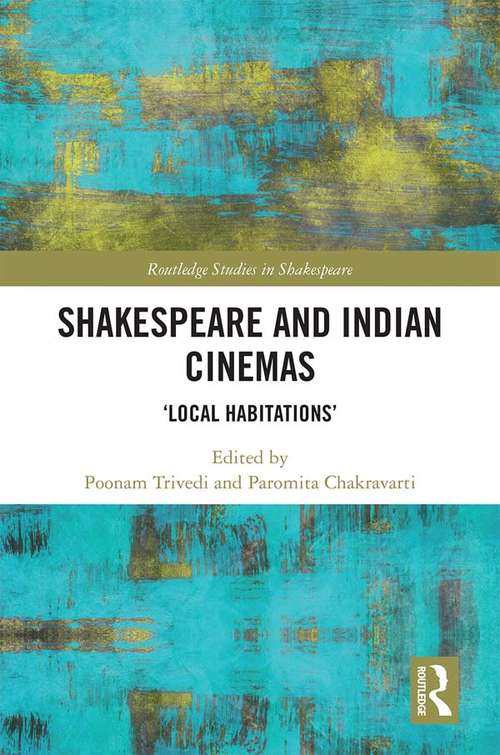 This book is the first to explore the rich archive of Shakespeare in Indian cinemas, including less familiar, Indian language cinemas to contribute to the assessment of the expanding repertoire of Shakespeare films worldwide. Essays cover mainstream and regional Indian cinemas such as the better known Tamil and Kannada, as well as the less familiar regions of the North Eastern states. The volume visits diverse filmic genres, starting from the earliest silent cinema, to diasporic films made for global audiences, television films, independent films, and documentaries, thus expanding the very notion of ‘Indian cinema’ while also looking at the different modalities of deploying Shakespeare specific to these genres. Shakespeareans and film scholars provide an alternative history of the development of Indian cinemas through its negotiations with Shakespeare focusing on the inter-textualities between Shakespearean theatre, regional cinema, performative traditions, and literary histories in India. The purpose is not to catalog examples of Shakespearean influence but to analyze the interplay of the aesthetic, historical, socio-political, and theoretical contexts in which Indian language films have turned to Shakespeare and to what purpose. The discussion extends from the content of the plays to the modes of their cinematic and intermedial translations. It thus tracks the intra–Indian flows and cross-currents between the various film industries, and intervenes in the politics of multiculturalism and inter/intraculturalism built up around Shakespearean appropriations. Contributing to current studies in global Shakespeare, this book marks a discursive shift in the way Shakespeare on screen is predominantly theorized, as well as how Indian cinema, particularly ‘Shakespeare in Indian cinema’ is understood.