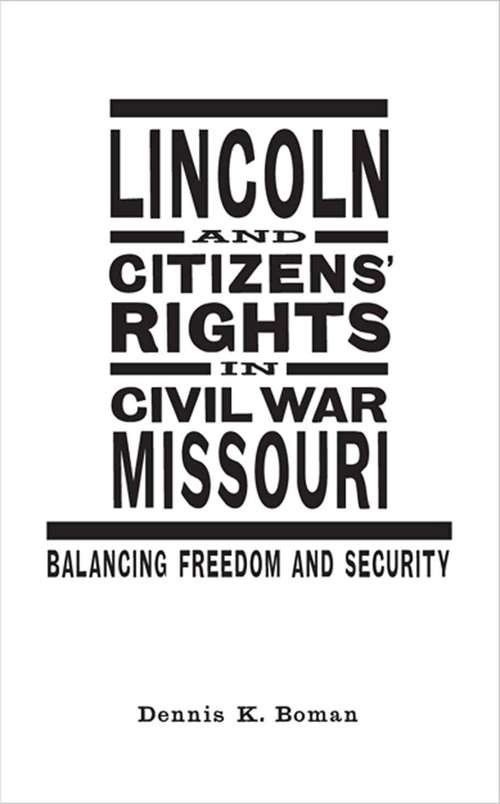 During the Civil War, the state of Missouri presented President Abraham Lincoln, United States military commanders, and state officials with an array of complex and difficult problems. Although Missouri did not secede, a large minority of residents owned slaves, sympathized with secession, or favored the Confederacy. Many residents joined a Confederate state militia, became pro-Confederate guerrillas, or helped the cause of the South in some subversive manner. In order to subdue such disloyalty, Lincoln supported Missouri's provisional Unionist government by ordering troops into the state and approving an array of measures that ultimately infringed on the civil liberties of residents. In this thorough investigation of these policies, Dennis K. Boman reveals the difficulties that the president, military officials, and state authorities faced in trying to curb traitorous activity while upholding the spirit of the United States Constitution. Boman explains that despite Lincoln's desire to disentangle himself from Missouri policy matters, he was never able to do so. Lincoln's challenge in Missouri continued even after the United States Army defeated the state's Confederate militia. Attention quickly turned to preventing Confederate guerrillas from attacking Missouri's railway system and from ruthlessly murdering, pillaging, and terrorizing loyal inhabitants. Eventually military officials established tribunals to prosecute captured insurgents. In his role as commander-in-chief, Lincoln oversaw these tribunals and worked with Missouri governor Hamilton R. Gamble in establishing additional policies to repress acts of subversion while simultaneously protecting constitutional rights -- an incredibly difficult balancing act. For example, while supporting the suppression of disloyal newspapers and the arrest of persons suspected of aiding the enemy, Lincoln repealed orders violating property rights when they conflicted with federal law. While mitigating the severity of sentences handed down by military courts, Boman shows, Lincoln advocated requiring voters and officeholders to take loyalty oaths and countenanced the summary execution of guerrillas captured with weapons in the field. One of the first books to explore Lincoln's role in dealing with an extensive guerrilla insurgency, Lincoln and Citizens' Rights in Civil War Missouri illustrates the difficulty of suppressing dissent while upholding the Constitution, a feat as complicated during the Civil War as it is for the War on Terror.