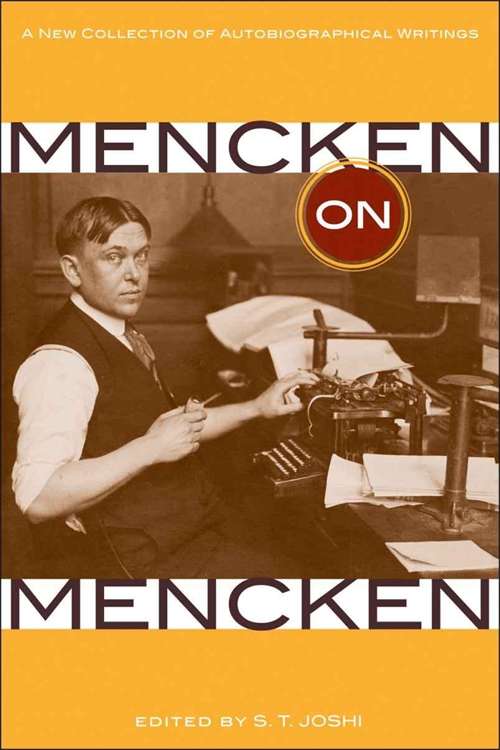 "Mencken weighs 172 pounds, is 5 feet 10 inches in height and not beautiful. His chief amusement, after reading, is piano-playing, this he does very crudely. He takes no exercise except walking and is a moderate eater and drinker. He sometimes drinks as little as one bottle of beer a week, though this doesn't happen very often." So wrote H. L. Mencken about himself, in a brief sketch of his life penned in 1905.Perhaps America's foremost literary stylist and most mordant wit, Mencken's most engaging writing told about his own life and experiences. In Mencken on Mencken, veteran Mencken editor and scholar S. T. Joshi has assembled a hefty collection of the best of Mencken's autobiographical pieces that have not appeared previously in book form. These forty-four selections cover a wide variety of topics ranging from incidents from Mencken's everyday life to reflections on friends and colleagues to his careers as author, journalist, and editor, to his travels abroad. As a journalist in Baltimore, Mencken encountered many unusual characters: a professional mourner hired by a beer distiller, a wagon driver who slept through the great Baltimore fire of 1904, a confirmed bachelor who left town to avoid the clutches of a predatory widow. He provides accounts of literary figures he knew, such as Theodore Dreiser, and ruminations on his work at the Baltimore Sun and as editor for the magazines Smart Set and the American Mercury. In an essay titled "What I Believe," he eschews humor and writes straightforwardly of his longtime scorn for the idea of religion, and in his journalist mode he reflects on a half-century of attending political conventions, drawing on his vast inside knowledge to savage the corruption and incompetence of the political class. A superb travel writer, Mencken gives us a rollicking account of beer-drinking in Munich, astute observations of political unrest in Cuba, and carefully drawn scenes from a long tour he and his wife made of the Mediterranean in 1934.Joshi has thoroughly annotated the pieces and also compiled an extensive glossary of names and terms that Mencken mentions. Mencken on Mencken offers a fully rounded self-portrait of one of America's most colorful personalities and most extraordinary men of letters.