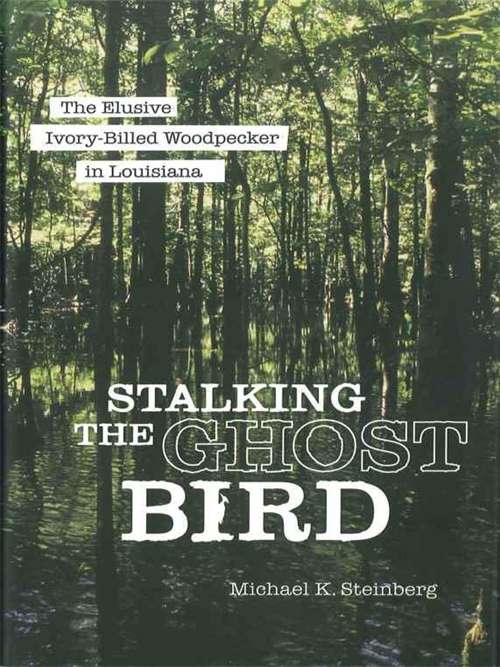 When a kayaker thought he spotted an ivory-billed woodpecker in 2004, the birding community took notice. Two birders traveled to the bayou where the sighting occurred, well aware that the last confirmed sighting of an ivory-bill had taken place over sixty years ago. Both men caught a glimpse of the bird, and a team began to search the surrounding swamplands. Even after long hours of surveillance and multiple sightings, the scientists cautiously refused to disclose their rediscovery of the extinct bird until they captured it on film. At last, armed with a short video and sound clip, they published their findings in Science, triggering a frenzy of media coverage and sparking a controversy among birders and scientists who continue to disagree about whether the bird really still exists. In Stalking the Ghost Bird, Michael K. Steinberg engages the lengthy debate over the ivory-bill's status by examining the reported sightings and extensive efforts to find the rare bird in Louisiana. Louisiana has long been at the center of the ivory-bill's story. John James Audubon wrote about the bird and its habitat during his stay in St. Francisville, and scientists James Tanner and George Lowery studied the ivory-bill in Louisiana in the 1930s and 1940s. More recently, bird experts have conducted targeted searches in Louisiana. Steinberg discusses these and other scientific expeditions, and he catalogs reported ivory-bill sightings since the 1950s, using a detailed timeline that includes both dates and specific locations.Interviews with conservation officials, ornithologists, and native Louisianans illuminate the ongoing controversy and explore why the ivory-bill, more than any other bird, arouses so much attention. Steinberg meets elderly residents of the Atchafalaya Basin who saw the ivory-bill while hunting in the 1930s and even ate the bird-which they called the "forest turkey"-during hard times. He paddles into Two O'Clock Bayou with one wildlife professor and travels to a cypress-filled wildlife refuge with the director of Louisiana's Nature Conservancy. His interviews illustrate how expert opinions vary, as well as how much local non-experts know.Steinberg also explores in detail the human impact on both the ivory-bill and its bottomland forest habitat, explains how forest-management practices in the South may pose problems for an ivory-bill recovery, and outlines where future searches for the bird should take place. In this absorbing study, Steinberg turns his lifelong interest in the majestic ivory-billed woodpecker into a tale that encapsulates both the mystery and intrigue surrounding the legendary bird and our fascination with it.