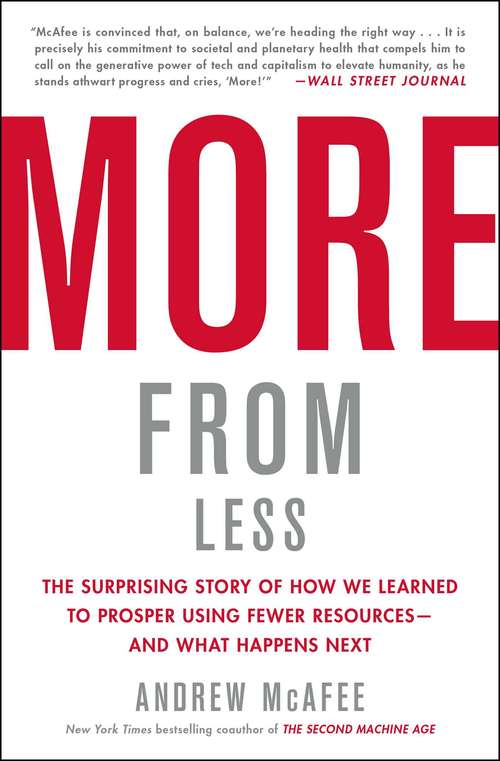 From the coauthor of the New York Times bestseller The Second Machine Age, a compelling argument—masterfully researched and brilliantly articulated—that we have at last learned how to increase human prosperity while treading more lightly on our planet. Throughout history, the only way for humanity to grow was by degrading the Earth: chopping down forests, fouling the air and water, and endlessly digging out resources. Since the first Earth Day in 1970, the reigning argument has been that taking better care of the planet means radically changing course: reducing our consumption, tightening our belts, learning to share and reuse, restraining growth. Is that argument correct? Absolutely not. In More from Less, McAfee argues that to solve our ecological problems we don’t need to make radical changes. Instead, we need to do more of what we’re already doing: growing technologically sophisticated market-based economies around the world. How can he possibly make this claim? Because of the evidence. America—a large, high-tech country that accounts for about 25% of the global economy—is now generally using less of most resources year after year, even as its economy and population continue to grow. What’s more, the US is polluting the air and water less, emitting fewer greenhouse gases, and replenishing endangered animal populations. And, as McAfee shows, America is not alone. Other countries are also transforming themselves in fundamental ways. What has made this turnabout possible? One thing, primarily: the collaboration between technology and capitalism, although good governance and public awareness have also been critical. McAfee does warn of issues that haven’t been solved, like global warming, overfishing, and communities left behind as capitalism and tech progress race forward. But overall, More from Less is a revelatory, paradigm-shifting account of how we’ve stumbled into an unexpectedly better balance with nature—one that holds out the promise of more abundant and greener centuries ahead.