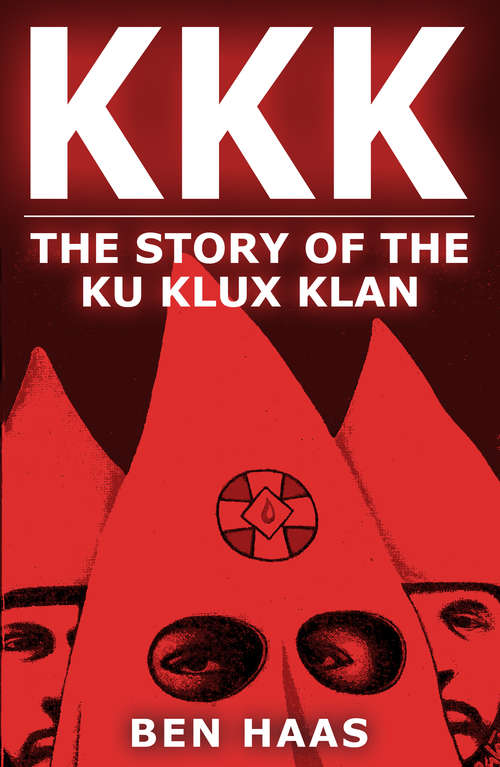 KKK: The Story of the Ku Klux Klan, first published in 1963, sets out to answer three questions about the KKK: what it is, why was it so hard to eradicate from American society, especially in the southern states; and how powerful is the Klan (at the time of the book’s publication). Through his extensive research and interviews with Klan leaders as well as knowledgeable outsiders, author Ben Haas attempts to answer these questions and provide insight into the origins, beliefs, and activities of this secret society.AS LONG AS THERE’S HATEKLANSMEN WILL RIDEThis is the frightening conclusion suggested by Ben Haas’ study of the Ku Klux Klan, yesterday, today, and until... Even as the House Committee on Un-American Activities, spurred on by the anger of President Johnson, investigates the midnight tyranny of the Klan’s “enforcers,” doubt is justified whether the whole monstrous picture of the Klan’s stubborn vitality can be dragged into the day light...and whether its flaming crosses will ever be doused. Avid “Americanism” and pious “old-time religion” bolster the vicious, fear-driven bigotry that may even today be spreading and solidifying its cruel grip on the nation. Here is the story of the hooded hate-mongers and their......INVISIBLE EMPIRE OF TERRORROUGHSHOD BIGOTRY..,THE MEN, THE MINDS, THE TRADITIONFrom its birth in the ashes of the Civil War to its resurgence in the heat of today’s civil rights struggle, here is the story of the Klan. It is a horror story told with scathing humor; a non-fiction nightmare detailed by a journalist who has interviewed present Klan leaders and dug for the truth behind their claims. Here is the face and the shape of the sprawling white monster that seemingly will not die.