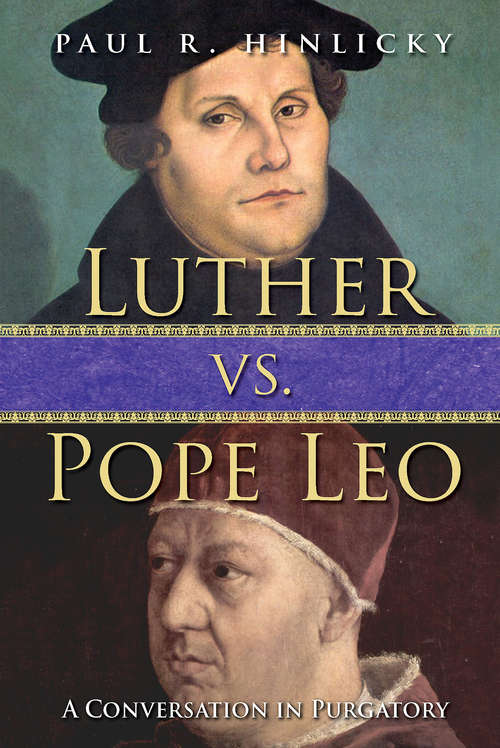 Martin Luther and Pope Leo X awake in the afterlife. It is 2017, and they have been asleep since the posting of the Ninety-Five Theses in 1517, the imagined execution of Luther, and the death of Leo in a strange accident. To their mutual chagrin not only does each discover the other face-to-face in “heaven,” but they learn that by divine decree they are roomed together indefinitely. The pope’s first reaction to the news is that this is his purgatory for the sins of the Medicis. Luther despairs that he is in hell: “It was works after all,” he surmises.

Discussing the key issues that divided Catholics and Protestants and birthed a Reformation 500 years ago, Hinlicky creates an imaginary reconciliation in heaven between Martin Luther and Pope Leo X, who work through the controversies that divided them in their historical encounter. They even get a little help from John Wesley. In this book, Luther and Leo become the creative instruments of a renewed commitment to Protestant-Catholic ecumenical reconciliation (as signaled by the Joint Declaration on the Doctrine of Justification by the Lutheran World Federation and the Catholic Church in 1999).

"What an imagination! Paul Hinlicky goes to the heart of the tragic beauty of the Lutheran movement. And along the way he invites us to reimagine the way the gospel is calling us to faith and hope right now. What an extraordinary book!"

“A fascinating thought experiment into how Martin Luther and Pope Leo might be forced to confront their differences, air their grievances, and inch toward reconciliation. Hinlicky sets up the purgatory scenes with illuminating historical backdrops that help us better understand each man’s motivations for his words and actions. As we appreciate more fully their views and their flaws, finding space for shared convictions becomes possible.” —Deanna A. Thompson, Professor of Religion, Hamline University, Saint Paul, MN; author, The Virtual Body of Christ in a Suffering World (Abingdon Press)

“Hinlicky’s imaginative construction of dialogue between Luther and Leo X bound together in purgatory is at once thoroughly engaging, theologically clarifying, and frequently amusing. The book should be of great interest to those who continue to be scandalized by the divisions in Christ’s body, especially as it suggests ways to reinvigorate the ecumenical conversation.”

“Imaging a conversation between Martin Luther and Pope Leo in purgatory, Paul Hinlicky weaves together history and theology to tell the story of the progress made in ecumenical relations since Vatican II. Playful yet profound, the book brims with theological insight!” - Lois Malcolm, Professor of Systematic Theology, Luther Seminary, St. Paul, MN