Nixon at the Movies 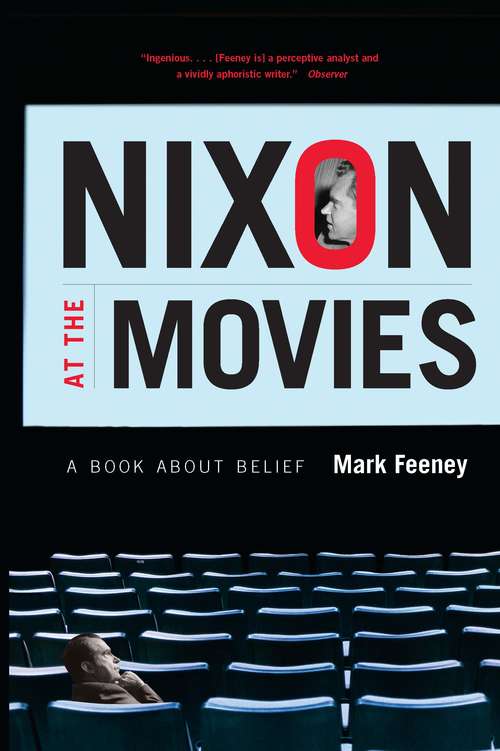 Was it an omen? Richard Nixon and the film industry arrived in Southern California in the same year, 1913. As Mark Feeney relates in this unusual and unusually absorbing book, Nixon and the movies have shared a long and complex history. Some of that historyOCothe president's multiple screenings of "Patton" before and during the invasion of Cambodia, or Oliver Stone's "Nixon"OCois well known. Yet much more is not. How many are aware, for example, that Nixon was an enthusiastic filmgoer who watched more than five hundred movies during his presidency? "Nixon at the Movies" takes a new and often revelatory approach to looking at Nixon's careerOCoand Hollywood's. From the obvious ("All the President's Men") to the less so (Elvis Presley movies and Nixon's relationship to '60s youth culture) to several onscreen alternate Nixons (Fred MacMurray in "Double Indemnity," Tony Curtis in "The Sweet Smell of Success," Gene Hackman in "The Conversation"), Feeney sees aspects of Nixon's character, and the nation's, refracted and reimagined in film. Conversely, Feeney argues that Nixon can help us see the movies in a new light, making a strong case for Nixon as the movies' tutelary deity during the early '70s, playing a role in Hollywood's Silver Age comparable to FDR's during its Golden Age. Stylishly written and bracingly eclectic, "Nixon at the Movies" draws on biography, politics, cultural history, and film criticism to show just how deeply in the twentieth-century American grain lies the pair of seemingly incongruous nouns in its title. As Nixon once remarked to Garry Wills: Isn't that a hell of a thing, that the fate of a great country can depend on camera angles?"