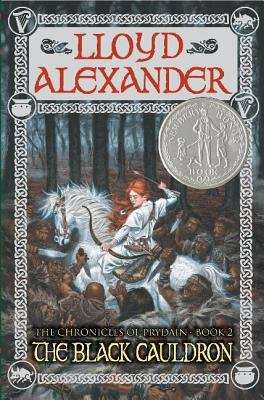 In the land of Prydain, evil is never far away. Arawn, Lord of the Land of Death, has been building an army of dark warriors to take over Prydain, and the only way to stop him is to destroy the Black Cauldron he uses to create his dreaded soldiers.

Taran, Assistant Pig-Keeper, and his loyal companions must journey deep into Arawn's domain to destroy the Black Cauldron. For each of them, the quest has special meaning. For Taran, it is a glorious opportunity to use his first sword in battle. But war requires a sacrifice greater than he'd ever imagined....

Back are our favorite characters from The Book Of Three; loyal Gurgi, still concerned with his munchings and crunchings, Doli who says being invisible has drawbacks like getting his toes stepped on, Fflewddur, telling the truth more and breaking harp strings less, and Princess Eilonwy, outspoken, practical and a friend indeed. There are new characters; Adaon, an aspiring harpist who is brave, patient and wise and wishes only to return to his betrothed love, and Prince Ellidyr who is contemptuous of Taran the assistant pig keeper, and who risks everyone's safety, including his own to claim glory for himself.

Lloyd Alexander packs this fantasy with adventure and humor and laces it with pettiness and nobility. Included in this edition is a Prydain pronunciation key and a sample chapter from the next book in this series, The Castle of Llyr.