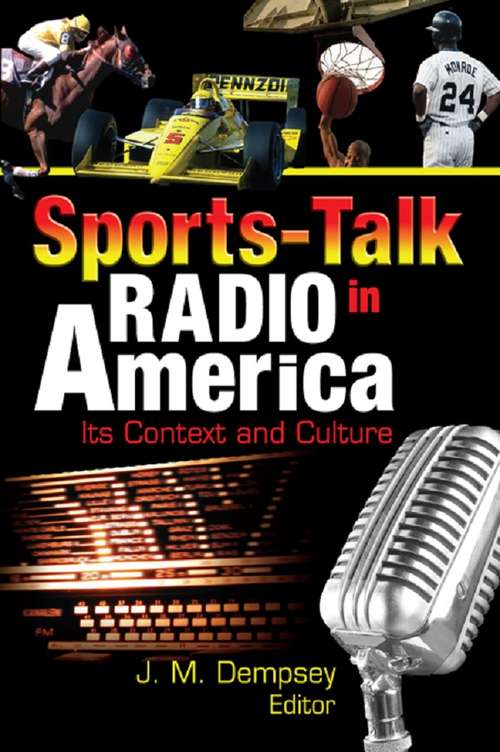 An inside look at the hosts, hot spots, and history of sports-talk radioSports-Talk Radio in America looks at major-, medium-, and small-market stations across the United States that feature an all-sports format, with a focus on the unique personalities and programming strategies that make each station successful. Broadcasters, journalists, and academics provide insight on how and why this media phenomenon has become an important influence of American culture, examining the guy talk broadcasting approach, the traditional sports-emphasis approach, HSOs (hot sports opinions), localism in broadcasting, how sports talk radio builds communities of listeners, and how reckless, on-air comments can actually build ratings.For better of worse, millions of (mostly) male listeners indulge their obsession with sports to the exclusion of virtually everything else available on the radio dial-music, news, and political talk. This unique book examines how this niche of the niche has formed a bond between its hosts and their rabid, passionate, and loyal audiences, spinning the dial from the largest, best-known stations in big-league markets to smaller stations in Collegetown, USA, including Philadelphia&’s WIP, The Ticket, KTCK in Dallas, WEEI in Boston, The Team, WQTM in Orlando, KJR in Seattle, KOZN The Zone Omaha, Nebraska, WGR and WNSA in Buffalo, Kansas City&’s WHB, and The Fan, WFAN in New York, the first all-sports radio station and the blueprint for the format. Sports-Talk Radio in America puts you in the studio with Mike and the Mad Dog, Angelo Cataldi, Howard Eskin, The Musers (Junior Miller and George Dunham), Norm Hitges, John Dennis and Gerry Callahan, Dan Sileo, Howard Simon, and Art Wander. Sports-Talk Radio in America examines: how stations create an environment in which listeners become part of a social group (social-identity and self-categorization theories) personality-driven programming the station&’s commitment to local teams and their fans how exploring controversial topics beyond sports broadens station&’s appeal and attracts upscale, affluent audience how an abundance of live, play-by-play broadcasting, creating plenty of available content college sports in a town without a major professional sports team how local sports is framed by hosts and callers the conflicted relationship between sports-talk radio and the print media and much more!Sports-Talk Radio in America is a must-read for academics and professionals working in radio-television and popular culture.