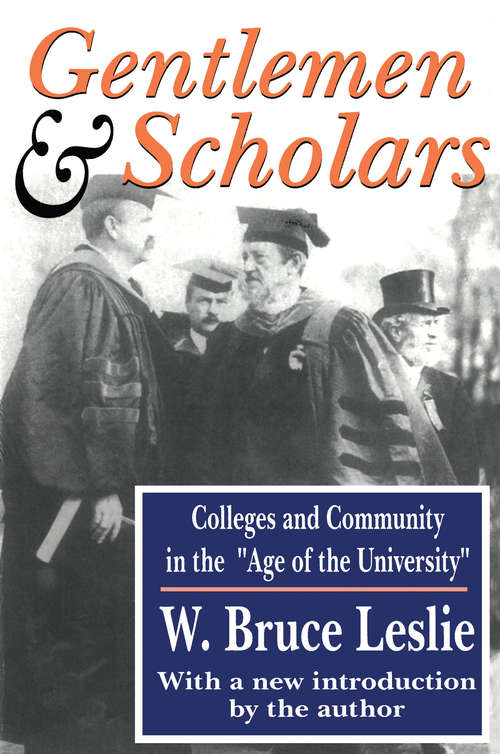 Historians have dubbed the period from the Civil War to World War I "the age of the university," suggesting that colleges, in contrast to universities, were static institutions out of touch with American society. Bruce Leslie challenges this view by offering compelling evidence for the continued vitality of colleges, using case studies of four representative colleges from the Middle Atlantic region u Bucknell, Franklin and Marshall, Princeton, and Swarthmore. A new introduction to this classic reflects on his work in light of recent scholarship, especially that on southern universities, the American college in the international context, the experience of women, and liberal Protestantism's impact on the research university.According to Leslie, nineteenth-century colleges were designed by their founders and supporters to be instruments of ethnic, denominational, and local identity. The four colleges Leslie examines in detail here were representative of these types, each serving a particular religious denomination or lifestyle. Over the course of this period, however, these colleges, like many others, were forced to look beyond traditional sources of financial support, toward wealthy alumni and urban benefactors.This development led to the gradual reorientation of these schools toward an emerging national urban Protestant culture. Colleges that responded to and exploited the new currents prospered. Those that continued to serve cultural distinctiveness and localism risked financial sacrifice. Leslie develops his argument from a close study of faculties, curricula, financial constituencies, student bodies, and campus life. The book will be valuable to those interested in American history, higher education, as well as the particular institutions studied."This book continues the story started by Veysey's Emergence of the American University. Its innovative approach should encourage scholars to study colleges and universities as parts of local communities rather than as freestanding entities. Leslie's findings will substantially revise currently accepted accounts of the history of education in the late nineteenth century."--Louise L. Stevenson, Franklin and Marshall College