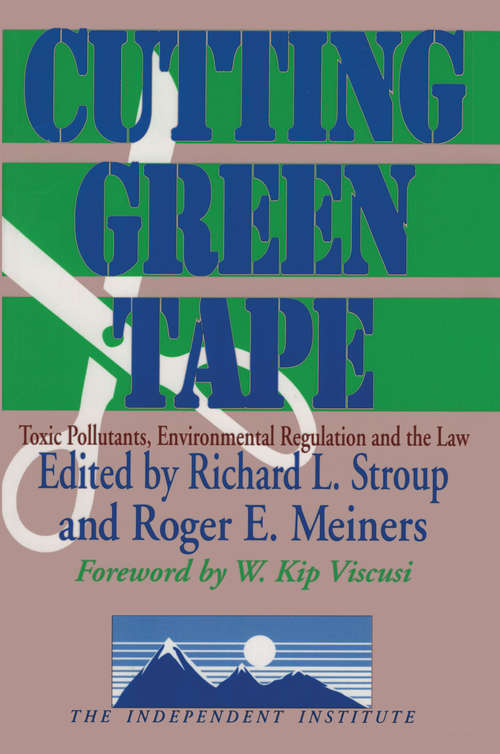 Hundreds of hazardous waste sites are on the Superfund National Priority List in the United States, and thousands more could become eligible. The Superfund has spent or ordered the spending of billions of dollars, with little apparent impact on human health risks. While public perception of the real or imagined hazardous nature of consumer and industrial substances has resulted in widespread attention to the issue, lawsuits have proliferated with liability aimed at "deep pockets" instead of individual agents who may be responsible. Contributors to Cutting Green Tape carefully examine the existence and severity of the toxic harms and liability problem, the erosion of a clear tort legal system to settle disputes, and whether a clearly defined system of property rights could be developed to reduce the dangers from toxic substances.Cutting Green Tape rethinks the nature and impact of today's environmental bureaucracy. Rather than continue unworkable, cumbersome, and often contradictory regulations, Cutting Green Tape prescribes a clearer tort legal system to settle disputes and demonstrates that clearly defined environmental property rights would reduce the threat of toxic substances. Among the many topics addressed are: air toxins policy; pollution, damages, and tort law; risk assessment, insurance, and public information; protecting groundwater; regulation of carcinogens; contracting for health and safety; and toxin torts by government.The book converges on a central theme: when common law remedies, with their burden of proof and standards of evidence, are replaced by the legislatively mandated regulatory regimes described, a problem emerges. The bureaucratic "tunnel vision" described by Justice Stephen Breyer, tends to take over. The police powers of the state are given to bureaucratic decision makers who are limited only by the blunt instrument of political influence, rather than by the need to show harm or wrongdoing in an unbiased court (as the police are), or by a budget on expenditures set by the Congress (as most bureaus are). The excesses described in the chapters thus result not from incompetence in the bureaus, but from the expansive powers granted to decision makers who are tightly focused on the narrow mission they see before them.