A Service Dog Goes to School 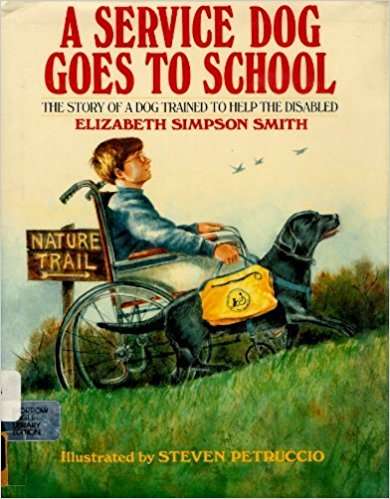 Scott looks back on his Licorice, a black Labra« as the high point in his life. Paralyzed from the waist down, the twelve-year-old could not go anywhere unless a friend or relative came along to push his wheelchair. Now Licorice pulls Scott's chair to school, to a shopping mall or a movie -anywhere. She turns on lights, too, and opens the refrigerator door. She even punches elevator buttons for him.

Licorice is a service dog. She and a growing number of dogs have been specially trained to do all these amazing things and more, so that they can bring independence to people whose movement is limited.

This carefully researched book- the first of its kind-tells how Licorice and other service dogs learn to perform their tasks. It describes how Licorice was chosen as a puppy for this work, socialized with a volunteer family, and then returned to the school for the extensive training in her special service.

A Service Dog Goes to School is the story of how one loving black Labrador has become the legs and feet, the arms and hands-and the best friend-of a wheelchair-bound boy.

ELIZABETH SIMPSON SMITH has contributed to a number of national publications, including Good Housekeeping, American Forests, and National Historic Preservation, and has served as correspondent for several regional magazines. Among her well-received children's books are Five First Ladies; A Guide Dog Goes to School; and A Dolphin Goes to School, which is an NSTA Outstanding Science Trade Book for Children. Her writings have won her North Carolina's Smithwick Cup for historical articles and the Sullivan Award for short fiction. In addition to writing, Ms. Smith operates a communications agency in Charlotte, North Carolina. She and her husband live in Denver, North Carolina.

STEVEN PETRUCCIO comes from a family of artists. He graduated from the School of Visual Arts in New York City, and has illustrated Doctor Hilda Makes House Calls, among other titles. He and his artist-wife live in Fishkill, New York.