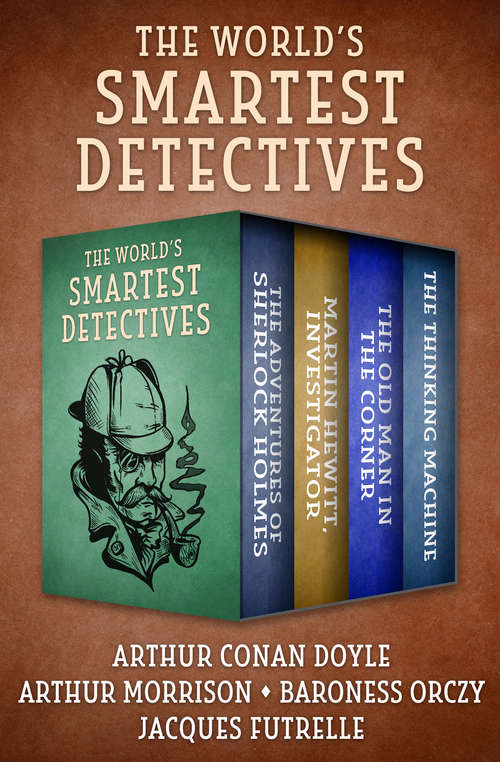 A treasure trove of mysteries drawn from the case files of the world's cleverest private investigators. The Adventures of Sherlock Holmes features many of the consulting detective's best-known cases. "A Scandal in Bohemia" finds Holmes matching wits with--and being outfoxed by--a beautiful American opera singer. A struggling shop owner stumbles into a lucrative side job, and a criminal conspiracy, in "The Red-Headed League." And in "The Adventure of the Speckled Band," which Arthur Conan Doyle named as the best of his Sherlock Holmes stories, our brilliant hero and his loyal friend Dr. Watson pay a visit to a young heiress's bedroom late one night, only to stumble across another, far deadlier visitor. Martin Hewitt, Investigator stars a former law clerk turned private investigator who is every bit the deductive equal of Sherlock Holmes. A true master of disguise with a mind as sharp as a freshly stropped straight razor, Hewitt possess a familiarity with London's night streets and an easy rapport with members of the lower classes. From a troubling series of robberies that occurred at the same residence over several months to a locked-room suicide that was decidedly not self-inflicted, the great detective finds irrefutable solutions to the most unsolvable of mysteries. The Old Man in the Corner is a fascinating study in the art of logical deduction by the author of The Scarlet Pimpernel. The most brilliant sleuth in London sits in the corner of the A.B.C. café, a length of string in his fingers. As the afternoon winds down, he ties and unties intricate knots--in the string and in his mind. No matter how baffling the crime, the old man in the corner need only read the newspaper accounts to know the culprit. The Thinking Machine relates the most confounding cases solved by the brilliant criminologist Professor S. F. X. Van Dusen. Slender, stooped, his appearance dominated by his large forehead and perpetual squint, "The Thinking Machine" spends his days in the laboratory and his nights puzzling over the details of extraordinary crimes. Whether unraveling the perfect murder, investigating a case of corporate espionage, or reasoning his way out of an inescapable prison cell, Van Dusen knows that with the application of logic, all problems can be solved. This ebook features new introductions by Otto Penzler and has been professionally proofread to ensure accuracy and readability on all devices.