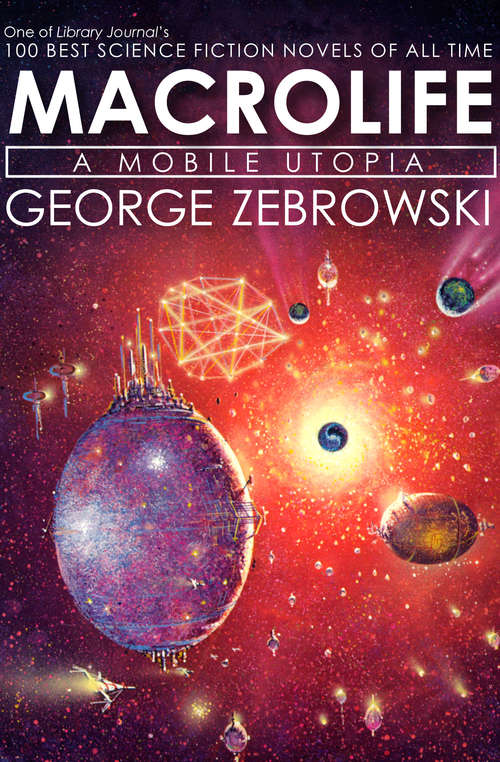 Subtitled A Mobile Utopia, this pioneering novel about the meaning of space habitats for human history, presents spacefaring as no work did in its time, and since. A Utopian novel like no other, presenting a dynamic utopian civilization that transcends the failures of our history. Epic in scope, Macrolife opens in the year 2021. The Bulero family owns one of Earth's richest corporations. As the Buleros gather for a reunion at the family mansion, an industrial accident plunges the corporation into a crisis, which eventually brings the world around them to the brink of disaster. Vilified, the Buleros flee to a space colony where young Richard Bulero gradually realizes that the only hope for humanity lies in macrolife--mobile, self-reproducing space habitats.A millennium later, these mobile communities have left our sunspace and multiplied. Conflicts with natural planets arise. John Bulero, a cloned descendant of the twenty-first century Bulero clan, falls in love with a woman from a natural world and experiences the harshness of her way of life. He rediscovers his roots when his mobile returns to the solar system, and a tense confrontation of three civilizations takes place.One hundred billion years later, macrolife, now as numerous as the stars, faces the impending death of nature. Regaining his individuality by falling away from a highly evolved macrolife, a strangely changed John Bulero struggles to see beyond a collapse of the universe into a giant black hole.Inspired by the possibilities of space settlements, projections of biology and cosmology, and basic human longings, Macrolife is a visionary speculation on the long-term future of human and natural history. Filled with haunting images and memorable characters, this is a vivid and brilliant work.Zebrowski's works have been translated into eight languages; his short fiction has been nominated for the Nebula Award and the Theodore Sturgeon Memorial Award. Brute Orbits, an uncompromising novel about a future penal system, was honored with the John W. Campbell Memorial Award for Best Novel of the Year in 1999.The Easton Press published Macrolife in its "Masterpieces of Science Fiction" series.