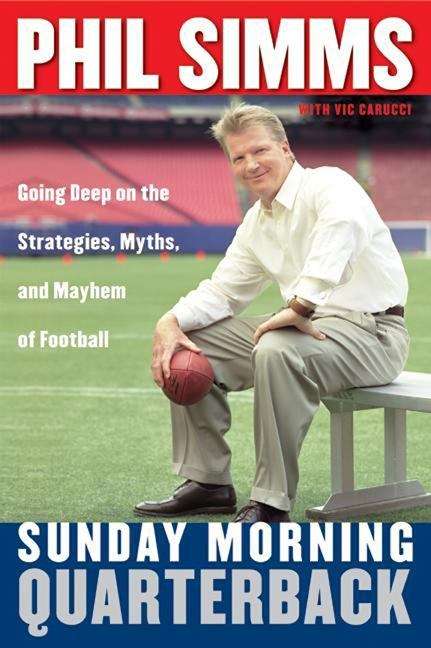 An in-depth and surprising look at the game, Sunday Morning Quarterback will dramatically change the way you watch football.

You've heard all the football clichÉs: "Their offense is too predictable," or "They've got to win the turnover battle," or "They didn't make any halftime adjustments." Perhaps you've heard them so often that you've come to see them as obvious truths. Phil Simms, after an illustrious career as a Super Bowl-winning quarterback and a broadcaster, is here to tell you that these -- and many other blanket statements taken as gospel -- are all myths, and whoever says them has no idea of what they're talking about.

Drilling deep into the core of football, Simms also shows the hidden signs that players look for that can determine the outcome of a game. Whether it's discovering how a linebacker positions his feet before he blitzes or how to react if the safety is eight or nine yards from the line of scrimmage, knowing these "dirty little secrets" gives players and their coaches a tremendous advantage.

In addition, Simms shares his insights into the enormous challenges coaches face in today's game, evaluating the top coaches and what makes them successful. He takes a look at some of the greatest players he's played with and against, and what he misses most about the game -- waking up Monday mornings feeling beat up and sore. He looks at the next generation of football players -- his son, Tampa Bay's Chris Simms, among them.

Through it all, Simms shares stories from his playing days with Bill Parcells and the New York Giants, and the inside access he's had as an announcer for one of the top NFL broadcasting teams in football.

Fun and lively, Sunday Morning Quarterback should be required reading for anyone who loves football.