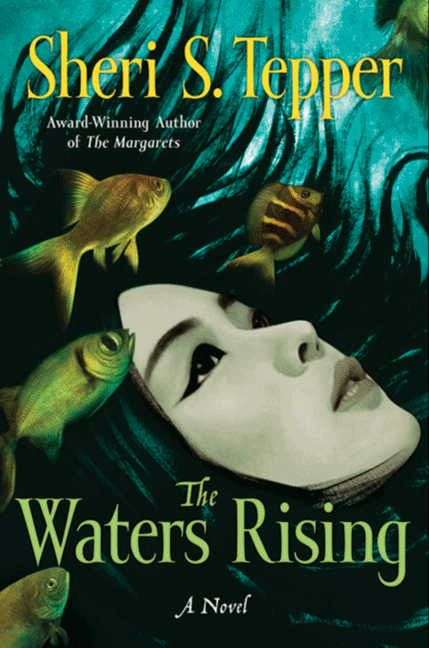 Acclaimed author Sheri S. Tepper returns with a stunning novel in which a dreadful, awesome, killing power is resurrected from the past . . . and only a dying woman, a child, and a man who has come to help them can prevent humanity's extinction

She is "one of sf's most distinctive voices" (Locus); a writer who "excels at surprises" (Oklahoma City Oklahoman) and "takes the mental risks that are the lifeblood of science fiction and all imaginative fiction" (Ursula K. Le Guin). The extraordinary Sheri S. Tepper creates bold tales, set in future societies, that offer provocative insights into our own world. The Waters Rising is her most ambitious and imaginative novel to date, a compelling saga of magic and science, intrigue and turmoil, war and peace, survival and extinction.

Long ago was the Big Kill, a time when the slaughterers walked the earth unseen, killing, departing, returning to kill again and again. Since then mountains have risen, deserts have fallen, the last of humankind has scattered; myth, superstition, and legend have replaced knowledge; and the great waters rising are changing the world.

In the west, the people of Norland live in small kingdoms, unaware that a hideous evil from ages past has been revived. Powers are being used. Curses are being laid . . . and the waters are rising as never before.

As forests drown, swamps become lakes, and roads disappear, houses-whole towns-are hitched to teams of oxen and moved upward. Misery is compounded when the Sea King declares war. No ships may sail on the new, growing oceans, and refugees from sunken islands continue to arrive.

And in Norland a cursed princess fights death, awaiting the one who can save not her, but perhaps humanity. She is tended by one fearful young girl, her servant and soul carrier, Xulai, a child of her own kind from the mystical kingdom of Tingawa. Upon her mistress's death, Xulai must return to their homeland to fulfill a sacred mission.

Accompanied by her protectors, Great Bear and Precious Wind, and guided by the mysterious wanderer Abasio and his talking horse, Big Blue, the band begins a journey to this land across the western sea where the waters' rising has long been expected. Their odyssey, fraught with peril and wonder, is long enough for plans to be made that are so strange, so audacious, that they are instantly dismissed; plans so potentially successful that an ancient killer must be awakened to stop their fulfillment.

Deeply original in scope and vision, The Waters Rising is a daring and remarkable work of fiction from a master of the craft.