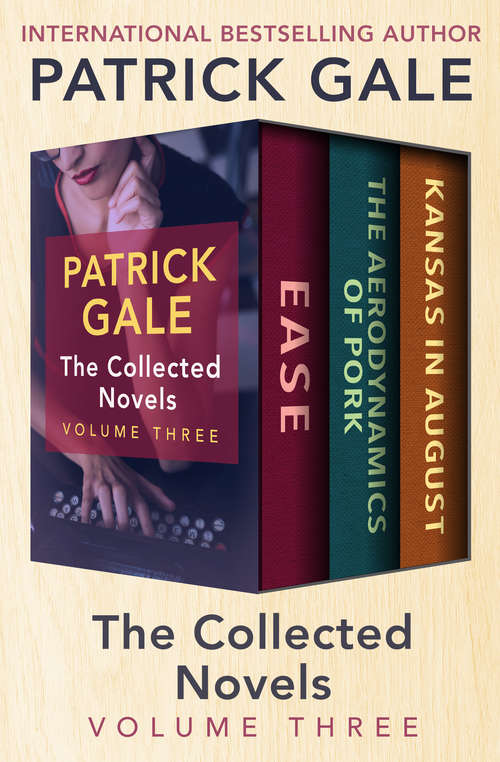 Three irreverent comic novels from an international bestselling British writer “with heart, soul, and a dark and a naughty wit” (The Observer). “A clever, original writer with a sharp eye for social comedy and an equally sharp ear for dialogue,” Patrick Gale is able to find the comic irony as well as the all-too-human drama in our foibles. In his first three novels, collected here, he mines a rich vein of comedy in characters such as a playwright who reinvents herself, a teenage violin prodigy eager to meet the man of his dreams, a lesbian police inspector rediscovering her libido, and a teacher who surprises himself with an irrepressible paternal instinct (The Washington Post). Ease: An award-winning but world-weary playwright, Domina Tey takes on a fake name and a bedsit in Bayswater, then one of London’s seedier districts, to find her muse again. Soon she finds herself getting involved with her fellow tenants: a wannabe actress, a gay Frenchman, and a devout member of the local Greek Orthodox Church. They show Domina a side of life she’s never seen before, and she learns that before she can start writing again, she will have to live. “Captivating . . . a novel that pleads to be read at a single sitting.” —Publishers Weekly The Aerodynamics of Pork: Gale’s “sad, funny, deeply searching” debut novel follows two parallel love stories that ultimately intersect in a surprising way: Fifteen-year-old violin prodigy Seth Peake is secretly attracted to men and looking for romance at a summer music festival in Cornwall, and closeted lesbian police inspector Maude Faithe is trying to solve a mysterious series of burglaries that target astrologists in London, even as she engages in her own star-crossed infatuation (Publishers Weekly). “Gale’s concoction is irresistible: modern relationships with period charm. I couldn’t have liked it more.” —Armistead Maupin Kansas in August: Stood up by his lover, Rufus, on his birthday, unhappy English teacher Hilary Metcalfe discovers a frightened, abandoned baby boy in a London tube station. Drunk and lonely, Hilary brings the baby home to his Shepherd’s Bush flat, and soon finds he cannot live without the child. As Rufus falls into a romantic encounter with, of all people, Hilary’s sister, the three are caught in a bizarre love triangle—with a baby in the middle. “The bawdy narrative strands are cleverly woven together with witty and urbane dialogue and piquant characterization, so that the reader is thoroughly absorbed in this irreverent tour de force.” —Publishers Weekly