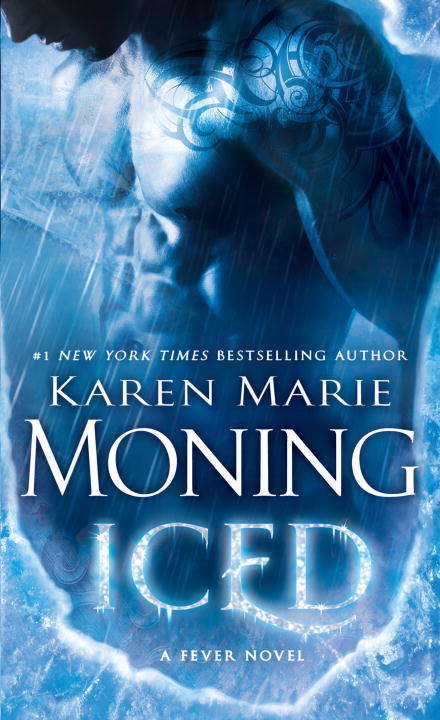 #1 New York Times bestselling author Karen Marie Moning picks up where Shadowfever leaves off with Iced, the sixth book in her blockbuster Fever series. The year is 1 AWC--After the Wall Crash. The Fae are free and hunting us. It's a war zone out there, and no two days are alike. I'm Dani O'Malley, the chaos-filled streets of Dublin are my home, and there's no place I'd rather be. Dani "Mega" O'Malley plays by her own set of rules--and in a world overrun by Dark Fae, her biggest rule is: Do what it takes to survive. Possessing rare talents and the all-powerful Sword of Light, Dani is more than equipped for the task. In fact, she's one of the rare humans who can defend themselves against the Unseelie. But now, amid the pandemonium, her greatest gifts have turned into serious liabilities. Dani's ex-best friend, MacKayla Lane, wants her dead, the terrifying Unseelie princes have put a price on her head, and Inspector Jayne, the head of the police force, is after her sword and will stop at nothing to get it. What's more, people are being mysteriously frozen to death all over the city, encased on the spot in sub-zero, icy tableaux. When Dublin's most seductive nightclub gets blanketed in hoarfrost, Dani finds herself at the mercy of Ryodan, the club's ruthless, immortal owner. He needs her quick wit and exceptional skill to figure out what's freezing Fae and humans dead in their tracks--and Ryodan will do anything to ensure her compliance. Dodging bullets, fangs, and fists, Dani must strike treacherous bargains and make desperate alliances to save her beloved Dublin--before everything and everyone in it gets iced.BONUS: This edition includes an excerpt from Karen Marie Moning's Burned.Praise for Iced "Moning returns to the heady world of her Fever series, and the results are addictive and consistently surprising. . . . The best elements of Moning's sensual, shadowy epic are still here, from the sensual and enigmatic Fae to the super-alpha heroes and the breathless pace of their escalating conflicts. At its heart is a heroine whose development is likely to become the stuff of legends as this unforgettable, haunting series continues to evolve."--RT Book Reviews "This is one of my favorite 2012 reads . . . It's engaging, hilarious, amazing and Dani is going to be one heck of a woman."--USA Today "A gripping story that combines excellent storytelling with believable characters that are rendered both superhuman and superbly human, with emotional fragility and psychological vulnerability in an unstable world fraught with danger . . . Fast-paced, with nonstop action set in a fascinating urban fantasy world of Dublin under siege, this is a smart, bold and textured success." Kirkus Reviews "Moning is a master storyteller. I don't know how she does it, but she begs me to get on my knees and pay worship to the woman who has brought me the best, most labyrinthine stories and characters I've ever had the privilege to get to know. She weaves brilliantly, unapologetically, and without exception, and she has threaded the needle into me and I've been pulled, over and over, into her tapestry, and I don't think I'm ever getting out. Iced is no exception."--The Bawdy Book Blog (five-starred review)