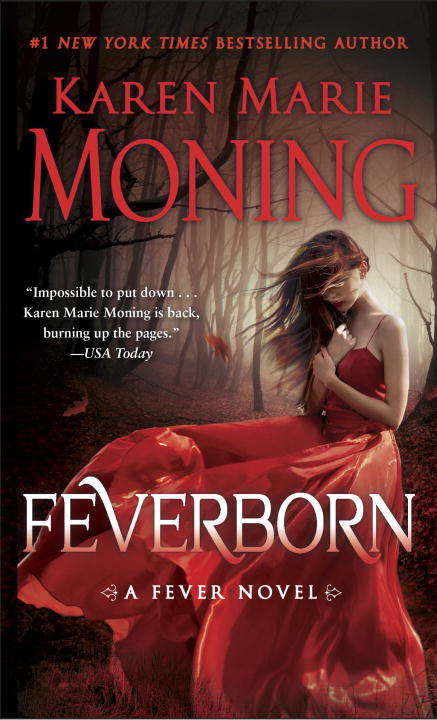 NEW YORK TIMES BESTSELLER * In Karen Marie Moning's latest installment of the epic Fever series, Mac, Barrons, Ryodan, and Jada are back--and the stakes have never been higher or the chemistry hotter. Hurtling us into a realm of labyrinthine intrigue and consummate seduction, Feverborn is a riveting tale of ancient evil, lust, betrayal, forgiveness, and the redemptive power of love. When the immortal Fae destroyed the ancient wall dividing the worlds of Man and Faery, the very fabric of the universe was damaged, and now Earth is vanishing bit by bit. Only the long-lost Song of Making--a haunting, dangerous melody that is the source of life itself--can save the planet. But those who seek the mythic song must contend with old wounds and new enemies, passions that burn hot and hunger for vengeance that runs deep. The challenges are many: the Keltar at war with nine immortals who've secretly ruled Dublin for eons, Mac and Jada hunted by the masses, the Seelie queen nowhere to be found, and the most powerful Unseelie prince in all creation determined to rule both Fae and Man. Now the task of solving the ancient riddle of the Song of Making falls to a band of deadly warriors divided among--and within--themselves. Once a normal city possessing a touch of ancient magic, Dublin is now a treacherously magical city with only a touch of normal. And on those war-torn streets, Mac will come face-to-face with her most savage enemy yet: herself.Look for all of Karen Marie Moning's sensational Fever novels: DARKFEVER | BLOODFEVER | FAEFEVER | DREAMFEVER | SHADOWFEVER | ICED | BURNED | FEVERBORN | FEVERSONGPraise for Feverborn "Moning's world-building is extensive and inspired, and she never fails to keep the action fast and the stakes high. . . . The heroes' shared danger, victory, loss and turmoil translate into emotional intensity and sexual tension."--The New York Times Book Review "Karen Marie Moning is back, burning up the pages with scorching tension, gasp-out-loud surprises, unshakable danger and unexpected feels. Feverborn is simply impossible to put down. . . . I'm not sure how Moning is able to do it after eight books, but each novel proves more exciting than its predecessor as she continues to raise the stakes in this ongoing, exhilarating saga. Feverborn is a fight between ancient magic and renewed determination, a duel between old wounds and deep-seated love. Once again, you won't be able to put this book down."--USA Today "Feverborn is at once the most gratifying and infuriating (in the best way possible) volume in the series yet. Moning's proclivity for passion, emotion and shocking twists is showcased in breathtaking clarity. . . . I can damn near guarantee that fans of the series will be panting, both with heat, and a frenzied need to know what happens next."--PopWrapped "Feverborn is a masterpiece of epic proportions. With this book, Karen Marie Moning shows us exactly why she is such an indispensable writer in the genre."--Under the Covers