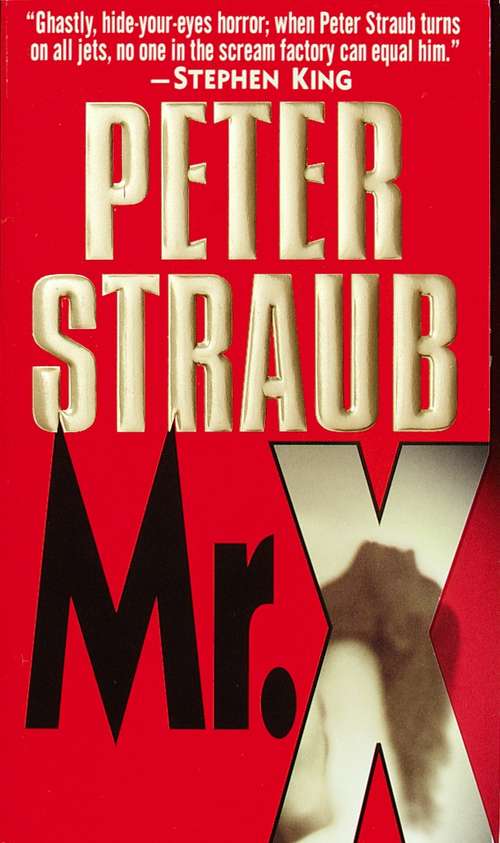 For more than two decades Peter Straub has engrossed, entertained, and terrified us with his dazzling blend of cool artistry and mad, spine-tingling imagination. With Mr. X, the bestselling author of Ghost Story, The Talisman(with Stephen King), and The Hellfire Club takes us into the darkest dimensions of the human psyche and proves once again that he is without peer in the realm of psychological suspense and horror, a master storyteller whose unique and powerful gifts qualify him to be called the Edgar Allan Poe of our times. Mr. Xis Straub's original and startling take on the theme of the doppelgänger. Ned Dunstan's birthday is fast approaching, and every year on this date, Ned experiences a paralyzing seizure in which he is forced to witness scenes of ruthless slaughter perpetrated by a mysterious and malevolent figure in black whom Ned calls Mr. X. Ned has been drawn back to his hometown, Edgerton, Illinois, by a premonition that his mother, Star, is dying. Before she loosens her hold on life, she imparts to Ned the name of his father, never before disclosed, and warns him that he is in grave danger. Despite her foreboding, Ned's determination to learn as much as possible about his absent father ignites a series of extraordinary adventures that gradually reveal the heart of both his own identity and that of his entirely fantastic family: He discovers that he is shadowed by an identical twin brother who can pass through doors and otherwise defy the laws of nature; he becomes the lead suspect in three violent deaths; he investigates the secret shadow-world within Edgerton; he learns to "eat time" and remembers the one occasion when he and his sinister brother united into a single being. Finally, at the moment of battle, he must call upon everything he has learned to save his own life. Brimming with the author's trademark wit, understated eloquence, vibrant characters, and brilliant sense of pace, Mr. X displays Peter Straub at the top of his form.