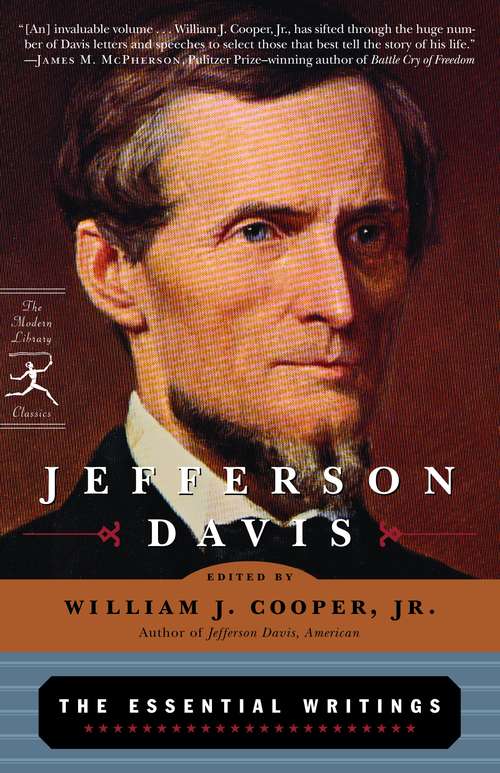 Jefferson Davis is one of the most complex and controversial figures in American political history (and the man whom Oscar Wilde wanted to meet more than anyone when he made his tour of the United States). Elected president of the Confederacy and later accused of participating in the assassination of Abraham Lincoln, he is a source of ongoing dissension between northerners and southerners. This volume, the first of its kind, is a selected collection of his writings culled in large part from the authoritative Papers of Jefferson Davis, a multivolume edition of his letters and speeches published by the Louisiana State University Press, and includes thirteen documents from manuscript collections and one privately held document that have never before appeared in a modern scholarly edition. From letters as a college student to his sister, to major speeches on the Constitution, slavery, and sectional issues, to his farewell to the U.S. Senate, to his inaugural address as Confederate president, to letters from prison to his wife, these selected pieces present the many faces of the enigmatic Jefferson Davis.As William J. Cooper, Jr., writes in his Introduction, "Davis's notability does not come solely from his crucial role in the Civil War. Born on the Kentucky frontier in the first decade of the nineteenth century, he witnessed and participated in the epochal transformation of the United States from a fledgling country to a strong nation spanning the continent. In his earliest years his father moved farther south and west to Mississippi. As a young army officer just out of West Point, he served on the northwestern and southwestern frontiers in an army whose chief mission was to protect settlers surging westward. Then, in 1846 and 1847, as colonel of the First Mississippi Regiment, he fought in the Mexican War, which resulted in 1848 in the Mexican Cession, a massive addition to the United States of some 500,000 square miles, including California and the modern Southwest. As secretary of war and U.S. senator in the 1850s, he advocated government support for the building of a transcontinental railroad that he believed essential to bind the nation from ocean to ocean."From the Hardcover edition.