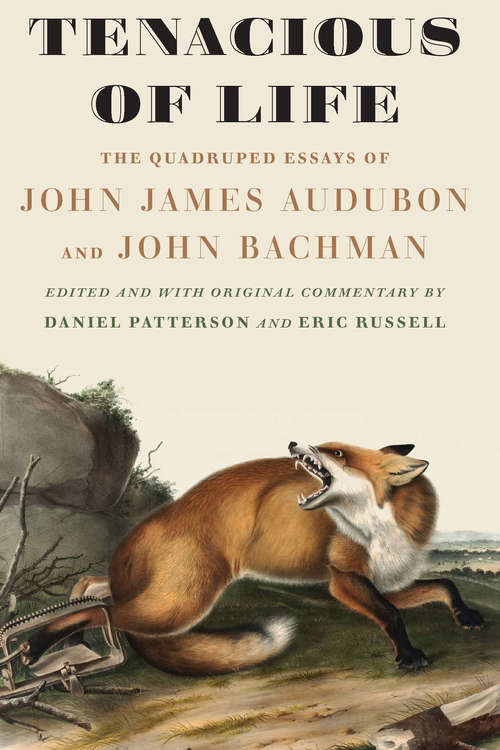 Daniel Patterson and Eric Russell present a groundbreaking case for considering John James Audubon&’s and John Bachman&’s quadruped essays as worthy of literary analysis and redefine the role of Bachman, the perpetually overlooked coauthor of the essays. After completing The Birds of America (1826–38), Audubon began developing his work on the mammals. The Viviparous Quadrupeds of North America volumes show an antebellum view of nature as fundamentally dynamic and simultaneously grotesque and awe-inspiring. The quadruped essays are rich with good stories about these mammals and the humans who observe, pursue, and admire them. For help with the science and the essays, Audubon enlisted the Reverend John Bachman of Charleston, South Carolina. While he has been acknowledged as coauthor of the essays, Bachman has received little attention as an American nature writer. While almost all works that describe the history of American nature writing include Audubon, Bachman shows up only in a subordinate clause or two. Tenacious of Life strives to restore Bachman&’s status as an important American nature writer. Patterson and Russell analyze the coauthorial dance between the voices of Audubon, an experienced naturalist telling adventurous hunting stories tinged often by sentiment, romanticism, and bombast, and of Bachman, the courteous gentleman naturalist, scientific detective, moralist, sometimes cruel experimenter, and humorist. Drawing on all the primary and secondary evidence, Patterson and Russell tell the story of the coauthors&’ fascinating, conflicted relationship. This collection offers windows onto the early United States and much forgotten lore, often in the form of travel writing, natural history, and unique anecdotes, all told in the compelling voices of Antebellum America&’s two leading naturalists.

Derechos de autor:
2021 the Board of Regents of the University of Nebraska