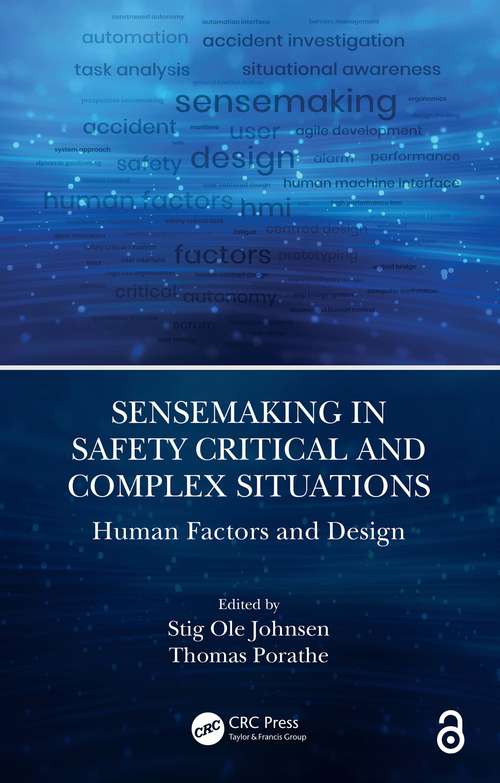 Human factors-based design that supports the strengths and weaknesses of humans are often missed during the concept and design of complex technical systems. With the focus on digitalization and automation, the human actor is often left out of the loop but needs to step in during safety-critical situations. This book describes how human factors and sensemaking can be used as part of the concept and design of safety critical systems in order to improve safety and resilience.

This book discusses the challenges of automation and automated systems when humans are left out of the loop and then need to intervene when the situation calls for it. It covers human control and accepts that humans must handle the unexpected and describes methods to support this. It is based on recent accident analysis involving autonomous systems that move our understanding forward and supports a more modern view on human errors to improve safety in industries such as shipping and marine.

The book is for human factors and ergonomists, safety engineers, designers involved in safety critical work and students.

Stig Ole Johnsen is a Senior Researcher at SINTEF in Norway. He has a PhD from NTNU in Norway with a focus on resilience in complex socio-technical systems and has a Master’s in Technology Management from MIT/NTNU. He chairs the Human Factors in Control network (HFC) in Norway to strengthen the human factors focus during development and implementation of safety critical technology. His research interests include meaningful human control to support safety and resilience during automation and digitalization.

Thomas Porathe has a degree in Information Design from Malardalen University in Sweden. He is currently Professor of Interaction Design at the Norwegian University of Science and Technology in Trondheim, Norway. He specializes in maritime human factors and design of maritime information systems, specifically directed towards control room design, e-navigation and autonomous ships. He has been working with e-Navigation since 2006 in EU projects such as BLAST, EfficienSea, MONALISA, ACCSEAS, SESAME and the unmanned ship project MUNIN. He is active in the International Association of Aids to Navigation and Lighthouse Authorities (IALA).