The Kat and Mouse Murder Mysteries One to Four 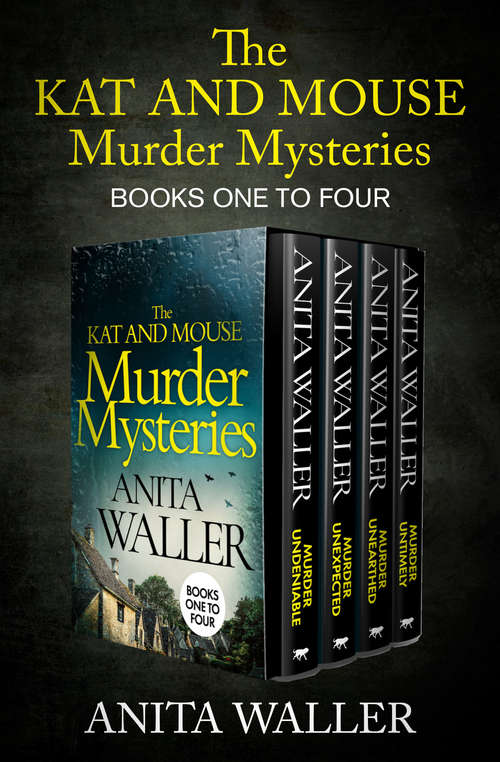 THE COMPLETE KAT AND MOUSE MURDER MYSTERY SERIES This great value boxset includes all four books in the bestselling mystery series. Discover your new favourite cozy mystery series today Murder Undeniable: Katerina Rowe, a Deacon at the church in the sleepy village of Eyam, has a fulfilled life. She is happily married to Leon and her work is rewarding. But everything changes when she discovers the body of a man and a badly beaten woman, Beth, in the alleyway behind her husband’s pharmacy. Drawn to the young woman she saved, Kat finds herself embroiled in a baffling mystery. When Beth’s house is set on fire, Kat offers the young woman sanctuary in her home and soon the pair begin investigating the murder, with some help from Beth’s feisty grandmother, Doris. But neither the police, nor Leon, nor the criminals want Kat and Beth looking into their affairs and the sleuths quickly find themselves out of their depth… Can Kat and Beth solve the mystery and walk away unscathed? Murder Unexpected: Church Deacon Kat and her friend Beth, known as Mouse, have started a private investigation business in the sleepy village of Eyam. Kat, whose estranged criminal husband, Leon, is on the run, has a lot on her plate running the new business whilst heavily pregnant. When a widow asks the sleuths for help, Kat and Mouse find themselves searching for the birth mother of the widow’s husband. But when it becomes clear that the widow isn’t telling the whole truth, Kat and Mouse are drawn into a deadly chase where nothing is what it seems. Meanwhile, Kat’s husband has come back to Eyam and has Kat in his sights. Can Kat and Mouse solve the case and escape the dangerous Leon? Murder Unearthed: When DI Tessa Marsden is called to a road traffic accident, she is disturbed by the crime scene she must investigate. She now has a double murder to contend with; two dead girls from the same village. Realising the murders aren’t linked, Marsden summons the help of the Connection Investigation Agency, run by Kat, a church Deacon, Beth, (known affectionately as Mouse), a computer expert, and Doris, Beth’s feisty grandmother. When it is discovered that one of the murdered girls was pregnant the case takes an unexpected turn. Can DI Marsden, with the input of Kat and Mouse, solve the case before another body appears? Meanwhile, the agency has been asked to track down the long lost son of Ewan Barker. Will Kat, Mouse and Doris find him and reunite him with his father? Murder Untimely: Early one morning, in the grounds of Chatsworth, a body is discovered by one of the estate groundsmen. DI Marsden and DS Granger battle through snow-covered roads to begin their investigation. Meanwhile, at the Connection Investigation Agency, Doris, Kat and Mouse are busy juggling their caseloads, while trying to show their new trainee receptionist the ropes. When the police learn that the body belongs to Nicola Armstrong, a resident of the nearby village of Baslow, it soon transpires that Nicola was the mother of a child who disappeared ten years prior to her murder. Soon, the Connection investigators are brought in to help but when a second body is found at Chatsworth, the case takes a disturbing turn. Anita Waller is the bestselling author of multiple thrillers including 34 Days, Malignant and Captor. The Kat and Mouse mysteries are bestselling murder mysteries which will appeal to fans of authors like Faith Martin, Agatha Christie, LJ Ross and Betty Rowlands.