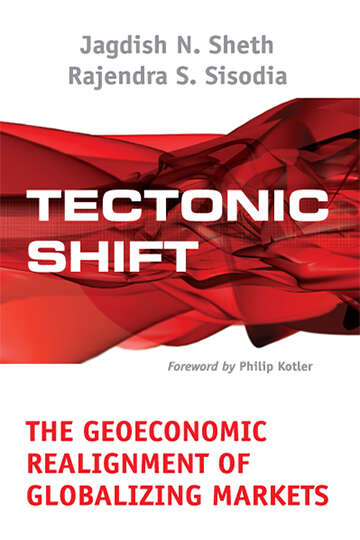 While the world is still coming to grips with the implications of globalization, Tectonic Shift investigates what the globe’s economic and geopolitical future looks like and discovers the unfolding of an unprecedented realignment of forces. Based on extensive study and analysis, the authors of this compelling book argue that regionalization will replace the much celebrated globalization, characterized by extensive North-South integration between developed and developing nations. They describe how the world is evolving into three huge economic and political unions, which will take shape by 2020, and predict that:

- The EU will expand both eastward as well as to the south, right up to Southern Africa.

- The Asian block, initially led by Japan and then by China, will encompass a united Korea, ASEAN, Australia and New Zealand and create a vast free trade area by approximately 2015.

- The US and Latin American nations will revive the Free Trade Area of the Americas (FTAA), and will be joined by the UK.

- South Asia will have its own free trade area, which will eventually ally with the FTAA.

Sheth and Sisodia argue that these evolving, strategic partnerships will involve free trade, monetary union, cross-border infrastructure investments, regional development agencies, and conflict resolution mechanisms. They also discuss the key steps that each region will have to take to be successful, and how it can overcome obstacles to change. Handled properly, the authors further argue, this evolution will result in faster and broader economic development coupled with diminished conflict among nations.