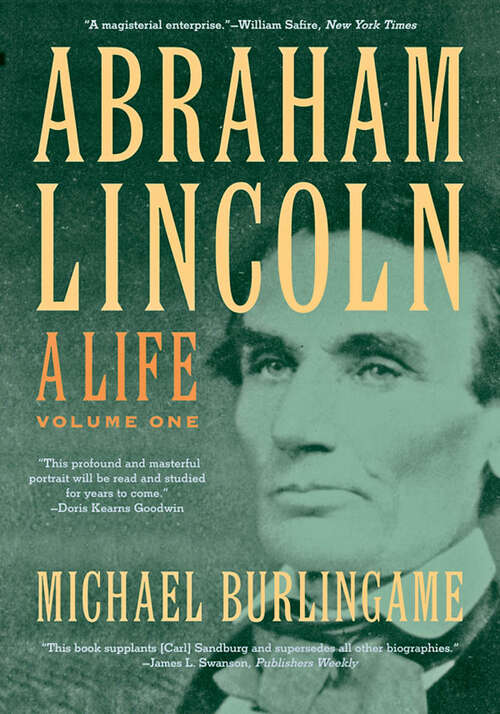 Now in paperback, this award-winning biography has been hailed as the definitive portrait of Lincoln.Named One of the 10 Top Lincoln Books by Chicago TribuneNamed One of the 5 Best Books of 2009 by The AtlanticWinner, 2008 PROSE Award for Best Book in U.S. History and Biography/Autobiography, Association of American PublishersWinner, 2010 Lincoln Prize from the Civil War Institute at Gettysburg CollegeIn the first multi-volume biography of Abraham Lincoln to be published in decades, Lincoln scholar Michael Burlingame offers a fresh look at the life of one of America’s greatest presidents. Incorporating the field notes of earlier biographers, along with decades of research in multiple manuscript archives and long-neglected newspapers, this remarkable work will both alter and reinforce our current understanding of America’s sixteenth president. Volume 1 covers Lincoln’s early childhood, his experiences as a farm boy in Indiana and Illinois, his legal training, and the political ambition that led to a term in Congress in the 1840s. In volume 2, Burlingame examines Lincoln’s life during his presidency and the Civil War, narrating in fascinating detail the crisis over Fort Sumter and Lincoln’s own battles with relentless office seekers, hostile newspaper editors, and incompetent field commanders. Burlingame also offers new interpretations of Lincoln’s private life, discussing his marriage to Mary Todd and the untimely deaths of two sons to disease. But through it all—his difficult childhood, his contentious political career, a fratricidal war, and tragic personal losses—Lincoln preserved a keen sense of humor and acquired a psychological maturity that proved to be the North’s most valuable asset in winning the Civil War. Published to coincide with the 200th anniversary of Lincoln's birth, this landmark publication establishes Burlingame as the most assiduous Lincoln biographer of recent memory and brings Lincoln alive to modern readers as never before.