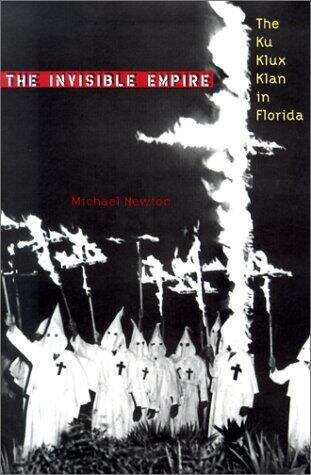 "The Ku Klux Klan was at least as violent in Florida as anywhere else in the nation, and the sheriffs, juries, judges, politicians, press, and citizens, for the most part, as culpable in its murderous history. [Its Florida history] is told for the first time in Michael Newton’s informative account."--David Chalmers, author of Hooded Americanism: The History of the Ku Klux Klan

In vivid, comprehensive, and often grim detail, Invisible Empire charts 130 years of Ku Klux Klan activity in Florida, one of the Klan’s most violent and enduring realms.

Beginning with the chaotic days of Reconstruction, when Klansmen killed more than 150 victims in a single county, this important history describes the organization’s influence on Florida politics and its links to modern law enforcement. From the KKK’s heyday during the 1920s and 1930s, its alignment in the 1970s and 1980s with a growing crop of neo-Nazis and other cultists, and its emergence in the 1990s on the fringe of the “right-to-life” movement, Florida Klansmen have waged a constant war against progressive society. Their crimes range from petty vandalism to assassination and destruction of entire communities. Florida governors have courted Klan ballots, and high-ranking lawmen collaborated with the Klan in campaigns of arson and murder.

In addition to recounting tales of violence, Newton addresses the critical question of how the hooded night riders continue to survive--a bitter, marginalized extremist movement that is still marching in what is arguably the Deep South’s most progressive and ethnically diverse state. He also discusses how to curb guerrilla warfare before the Klan and its allies inaugurate a new century of terror.

Michael Newton is a professional writer whose recent works include Racial and Religious Violence in America: A Chronology; The Encyclopedia of Serial Killers; and The Ku Klux Klan: An Encyclopedia, which received honorable mention awards from both the Simon Wiesenthal Center and the Southern Poverty Law Center’s Klanwatch project. He lives in Nashville, Indiana.

Derechos de autor:
2001 Board of Regents of the State of Florida