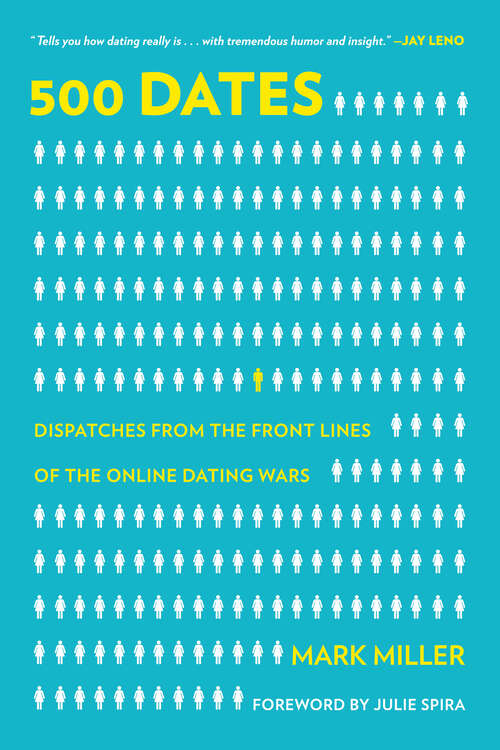 Now several years post-divorce, relationship expert and humorist Mark Miller has experienced more than five hundred first dates. In 500 Dates, composed of fifty-five humor essays, Miller features the highlights and lowlights of those dates.Among the true dating tales and revelations you will find in this book are: How Miller and his date learned the limitations of a man being too emotionally expressive. ("Most guys consider revealing more about themselves emotionally and communicating on a deeper level nearly as enjoyable as falling face-first onto an ice pick-or spending the rest of eternity listening to Celine Dion music.") Miller's realization that sometimes men have to pay a heavy price for their dates' previous relationship behavior.("At least six different times, God has matched me up with a woman who has had a long history of wild, impulsive, passionate, no-holds-barred sex. She invariably finds something lacking in that lifestyle and decides to make a change. Starting with the very next man she dates. Who is invariably me.") Miller's misguided social experiment to separate dating from status by spending less than $20 on the date, purchasing everything at a 99¢ store, and what he learned, as a result, about his date and himself. ("I realize now that on the journey of romance, thrift and creativity will take you only so far - for the rest of the trip, you'll need MasterCard.") Revealed for the first time the inner workings of a man's brain.("Cerebellum. Responsible for coordinating movement and maintaining balance. Used primarily when a man has had eight beers and is endeavoring to make his way to the bathroom without tripping over the dog and pulling the fish tank over on top of them.") How Miller took his date to his ex-wife's holiday party only to find his date and his ex-wife bonding like high school girlfriends. ("Pam would take Amy aside and present to her a list of all 273 of my failings, most of which, she confides to Amy, won't become noticeable until month three of Amy's being with me. Amy is stunned; she'd only been aware of 149 of my failings.")But 500 Dates is about much more than dating. Its humor essays also cover romance, relationships, breakups, attraction, the nature of love, and how both men and women view the art, science, expectations, and reality of courtship and turning courtship into something deeper and longer lasting in the twenty-first century. Throughout these essays, a portion of which were previously published in various media, Miller provides a sense of hope about one's romantic prospects. Readers will find that the end of a marriage, even a long-term one, does not mean the end of romance-or one's sense of humor.