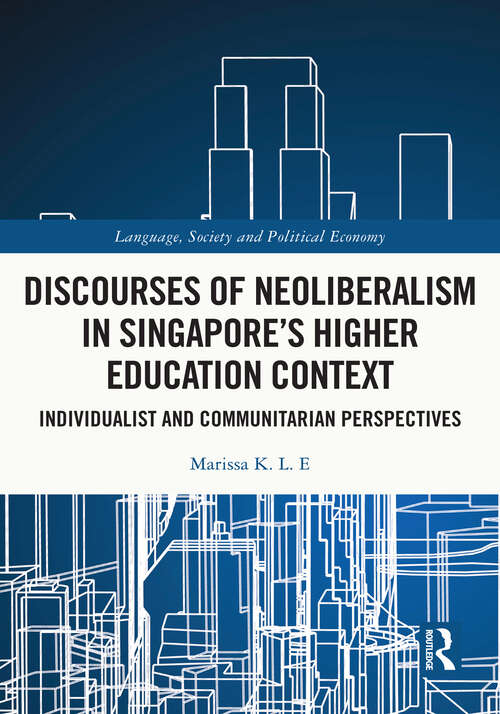 E explores, using textual (words) and visual (image) data from the corporate newsletters of two prominent Asian universities, how particular discourses and their associated discursive representations of neoliberal logic and subjectivity occur in higher education. In particular, she looks at the expression of both institutional priorities and state imperatives that lend themselves to a complementarity built upon two contradictory perspectives: individualism and communitarianism. She argues that the ever-increasing demand for, and utility of higher education in neoliberal society means that it no longer functions merely to provide knowledge and skills, but has implications for society, the individual and the state with regard to their ways of thinking, doing and being.

Contributing to a growing corpus of literature on how higher education around the world is being shaped by neoliberal policies, E’s research is based on work done in the city-state of Singapore, a less-well represented context in current literature. While both higher education institutions possess significantly different institutional identities and backgrounds, the alignment of their varied representations of neoliberal logic and subjectivity with state-sanctioned imperatives that indirectly impose demands and constraints shows how neoliberalism as ideology adapts to the socio-political, socio-cultural and socio-economic dimensions that make up the Singapore context. The discursive representations of context-dependent neoliberal logics and subjectivity are discussed in terms of their ideological implications, focusing primarily on the complementarity between seemingly contradictory ideological positions. E’s work uses an innovative framework that integrates aspects of Discourse Theory with Critical Discourse Analysis and demonstrates the use of this framework through empirical linguistic and image analysis.

Appealing to academics and graduate students in linguistics, especially those with an interest in critical multimodal discourse analysis, audiences from the domains of higher education research, critical geography, sociology and political science will also find this a useful book.