With God on Our Side 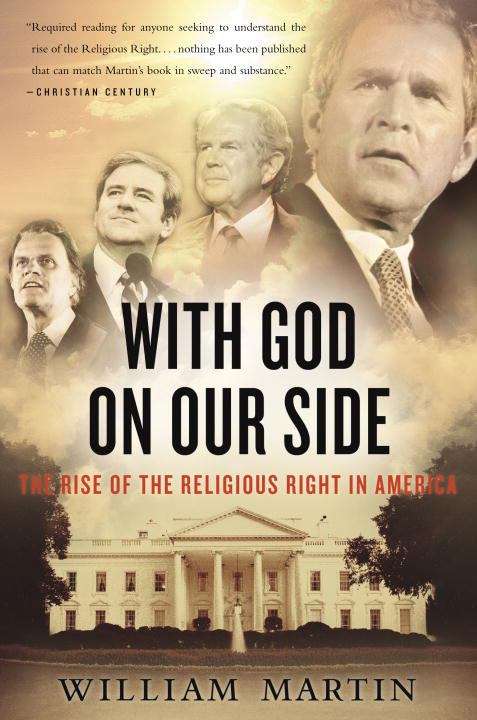 The rise of the Religious Right is one of the most important political and cultural stories of our time. To many, this controversial movement threatens to upset the nation's delicate balance of religious and secular interests. To others, the Religious Right is valiantly struggling to preserve religious liberty and to prove itself as the last, best hope to save America's soul. In With God on Our Side--the first balanced account of conservative Christians' impact on post-war politics--William Martin paints a vivid and authoritative portrait of America's most powerful political interest group. Although its members now number between forty and sixty million people, the Religious Right has not always carried the tremendous--and growing--political clout it enjoys today. A hundred years ago, scattered groups of conservative Christians worked fervently to spread the Gospel, but their involvement in politics was marginal. Early in this century, however, a series of charismatic and ambitious leaders began transforming the movement; by the election of John F. Kennedy as our first Catholic president, the Religious Right had found its voice. Politics and religion began mixing as never before. From Richard Nixon's strategic manipulation of Graham's religious influence in the 1970s, to Ronald Reagan's association with Falwell's Moral Majority in the 1980s, to the Christian Coalition's emergence as a slick, sophisticated political machine, the line separating the pulpit from the presidency became increasingly blurred. Now, preachers such as Graham, Falwell, and Pat Robertson preside over ministries so vast and well organized that most politicians can ill afford to ignore their views--or lose their votes. In recent years, the Religious Right's political influence has propelled it into spheres beyond pure politics. Race relations, abortion and reproductive rights, school curricula, the nature and role of the family--conservative Christians have embraced all of these socially charged issues, and their activism has irrevocably altered the way America confronts its thorniest problems. How does a free society draw the line between Church and State without removing religious conviction from public life? What motivates individual Americans to do battle in the culture wars? Most importantly, when politicians and religiously motivated activists join forces, who holds the reins? Drawing on over 100 new interviews with key figures in the movement, William Martin brilliantly captures the spirit of the age as he explores both sides of this dramatic debate. Written in conjunction with the producers of the public television series of the same name, this landmark book is essential reading for all Americans--conservative and liberal, fundamentalist and atheist--who care about the spiritual health and political future of our country.