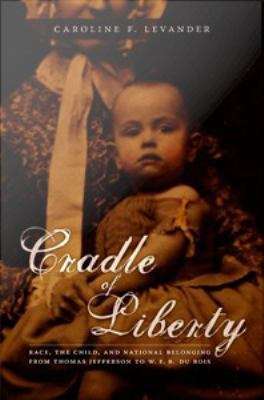 Throughout American literature, the figure of the child is often represented in opposition to the adult. In Cradle of Liberty Caroline F. Levander proposes that this opposition is crucial to American political thought and the literary cultures that surround and help produce it. Levander argues that from the late eighteenth century through the early twentieth, American literary and political texts did more than include child subjects: they depended on them to represent, naturalize, and, at times, attempt to reconfigure the ground rules of U. S. national belonging. She demonstrates how, as the modern nation-state and the modern concept of the child (as someone fundamentally different from the adult) emerged in tandem from the late eighteenth century forward, the child and the nation-state became intertwined. The child came to represent nationalism, nation-building, and the intrinsic connection between nationalism and race that was instrumental in creating a culture of white supremacy in the United States. Reading texts by John Adams, Thomas Paine, Harriet Beecher Stowe, Augusta J. Evans, Mark Twain, Pauline Hopkins, William James, Jos Mart, W. E. B. Du Bois, and others, Levander traces the child as it figures in writing about several defining events for the United States. Among these are the Revolutionary War, the U. S. -Mexican War, the Civil War, and the U. S. expulsion of Spain from the Caribbean and Cuba. She charts how the child crystallized the concept of self--a self who could affiliate with the nation--in the early national period, and then follows the child through the rise of a school of American psychology and the period of imperialism. Demonstrating that textual representations of the child have been a potent force in shaping public opinion about race, slavery, exceptionalism, and imperialism, Cradle of Liberty shows how a powerful racial logic pervades structures of liberal democracy in the United States.