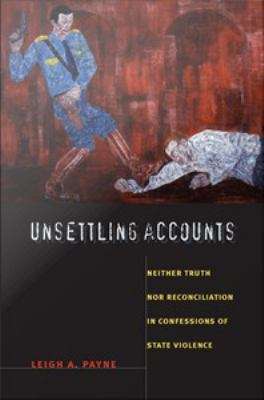 An Argentine naval officer remorsefully admits that he killed thirty people during Argentina's Dirty War. A member of General Augusto Pinochet's intelligence service reveals on a television show that he took sadistic pleasure in the sexual torture of women in clandestine prisons. A Brazilian military officer draws on his own experiences to write a novel describing the military's involvement in a massacre during the 1970s. The head of a police death squad refuses to become the scapegoat for apartheid-era violence in South Africa; he begins to name names and provide details of past atrocities to the Truth Commission. Focusing on these and other confessions to acts of authoritarian state violence, Leigh A. Payne asks what happens when perpetrators publicly admit or discuss their actions. While mechanisms such as South Africa's Truth and Reconciliation Commission are touted as means of settling accounts with the past, Payne contends that public confessions do not settle the past. They are unsettling by nature. Rather than reconcile past violence, they catalyze contentious debate. She argues that this debate--and the public confessions that trigger it--are healthy for democratic processes of political participation, freedom of expression, and the contestation of political ideas. Payne draws on interviews, unedited television film, newspaper archives, and books written by perpetrators to analyze confessions of state violence in Argentina, Chile, Brazil, and South Africa. Each of these four countries addressed its past through a different institutional form--from blanket amnesty, to conditional amnesty based on confessions, to judicial trials. Payne considers perpetrators' confessions as performance, examining what they say and what they communicate nonverbally; the timing, setting, and reception of their confessions; and the different ways that they portray their pasts, whether in terms of remorse, heroism, denial, or sadism, or through lies or betrayal.