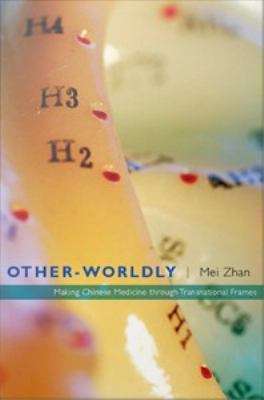 Traditional Chinese medicine is often portrayed as an enduring system of therapeutic knowledge that has become globalized in recent decades. In Other-Worldly, Mei Zhan argues that the discourses and practices called "traditional Chinese medicine" are made through, rather than prior to, translocal encounters and entanglements. Zhan spent a decade following practitioners, teachers, and advocates of Chinese medicine through clinics, hospitals, schools, and grassroots organizations in Shanghai and the San Francisco Bay Area. Drawing on that ethnographic research, she demonstrates that the everyday practice of Chinese medicine is about much more than writing herbal prescriptions and inserting acupuncture needles. "Traditional Chinese medicine" is also made and remade through efforts to create a preventive medicine for the "proletariat world," reinvent it for cosmopolitan middle-class aspirations, produce clinical "miracles," translate knowledge and authority, and negotiate marketing strategies and medical ethics. Whether discussing the presentation of Chinese medicine at a health fair sponsored by a Silicon Valley corporation, or how the inclusion of a traditional Chinese medicine clinic authenticates the "California" appeal of an upscale residential neighborhood in Shanghai, Zhan emphasizes that unexpected encounters and interactions are not anomalies in the structure of Chinese medicine. Instead, they are constitutive of its irreducibly complex and open-ended worlds. Zhan proposes an ethnography of "worlding" as an analytic for engaging and illuminating emergent cultural processes such as those she describes. Rather than taking "cultural difference" as the starting point for anthropological inquiries, this analytic reveals how various terms of difference--for example, "traditional," "Chinese," and "medicine"--are invented, negotiated, and deployed translocally. Other-Worldly is a theoretically innovative and ethnographically rich account of the worlding of Chinese medicine.