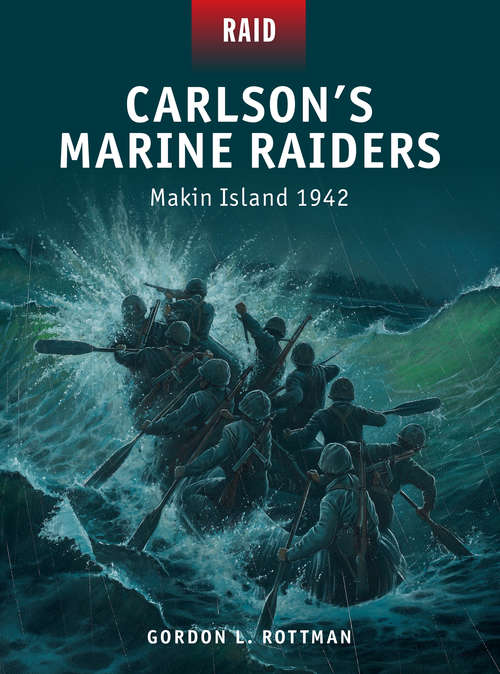 After the Guadalcanal landings, Admiral Nimitz wanted to distract Japanese attention by launching an amphibious raid elswhere. Foreshadowing Bloody Tarawa, Iwo Jima, Okinawa and countless other landings in the face of intense Japanese resistance, the Makin Raid taught the Marines a great deal. Featuring specially commissioned full-color artwork and expert analysis, this gripping account of the fateful Makin Raid tells the whole story, from the plan's conception to its troubled execution and aftermath.On August 17-18, 1942, 211 men of the US Marine Corps' 2nd Raider Battalion conducted a daring amphibious raid on the Japanese-occupied Makin Island in the South Pacific. This ambitious but flawed operation was intended to divert Japanese reinforcements bound for Guadalcanal, over 1,000 miles to the southwest, in the wake of the US landings there ten days earlier; the Raiders were to destroy the seaplane base and radio station, take prisoners, and collect intelligence. Although yielding limited results, it was to be an invaluable test of the innovative training and tactics employed by the Raiders, and a crucial boost to national morale at this difficult stage in the war.Lieutenant Colonel Evans F. Carlson led the 2nd Raiders into battle; drawing inspiration from the exploits of the British Commandos, Carlson had developed his unorthodox theories on the use of regular troops for guerrilla operations in close collaboration with his Executive Officer, Major James Roosevelt, the President's oldest son. Carlson stressed infiltration tactics and an egalitarian approach to leadership and decision-making, and believed passionately in "ethical indoctrination" as a means of motivating his men. His controversial techniques would be tested to the utmost by the escalating situation on Makin Island.The raid was hailed as a valorous exploit that greatly upset Japanese plans. There is little doubt that the troops gave their best under exceedingly difficult circumstances, but the battalion's leadership was found wanting. No Japanese reinforcements were diverted from Guadalcanal; the mission's goals were questionable, and the planners had not considered the likely long-term enemy response. In fact, the Japanese immediately implemented plans to reinforce remote bases that came under attack and massively increased the defenses of Makin and Tarawa Atolls, which had to be dealt with at great cost 15 months later. While the raid boosted morale at home, the raiders would attempt no further similar submarine-delivered raids.