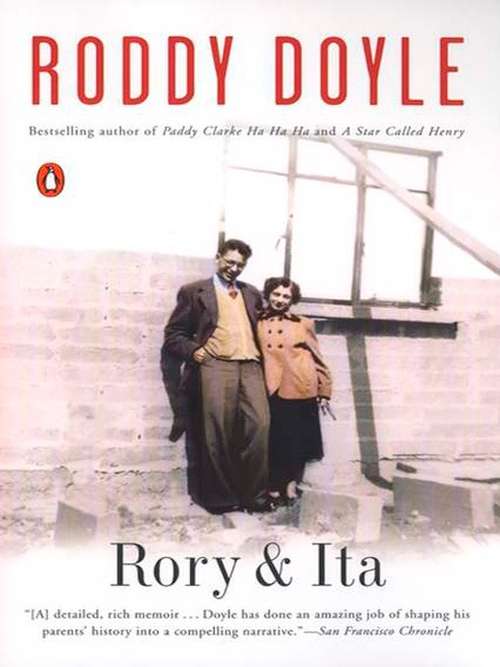 From the internationally acclaimed, bestselling novelist -- his first ever non-fiction book: a poignant, illuminating journey through a century of modern Ireland as told through the eyes of his parents.

Ita Doyle: "In all my life I have lived in two houses, had two jobs, and one husband. I'm a very interesting person."

Rory and Ita tells -- largely in their own words -- the story of Roddy Doyle's parents' lives from their first memories to the present. Born in 1923 and 1925 respectively, they met at a New Year's Eve dance in 1947 and married in 1951. Marvelous talkers, with excellent memories, they draw upon their own family experiences (Ita's mother died when she was three -- "the only memory I have is of her hands, doing things"; Rory was the oldest of nine children, five of them girls); and recall every detail of their Dublin childhoods -- the people (aunts, cousins, shopkeepers, friends, teachers), the politics (both came from Republican families), Ita's idyllic times in the Wexford countryside, and Rory's apprenticeship as a printer.

When Roddy's parents put down a deposit of two hundred pounds for a house in rural Kilbarrack, on the edge of Dublin, Rory was working as a compositor at the Irish Independent. By the time the first of their four children was born, he had become a teacher at the School of Printing in Dublin. Then, their home began to change ("Kilbarrack wasn't a rural place any more") along with the rest of the country, as the intensely Catholic society of their youth was transformed into the vibrant, complex Ireland of today.

Rory and Ita's captivating accounts of the last century, combined with Roddy Doyle's legendary skill in illuminating ordinary experience, make a story of tremendous warmth and humanity. This magnificent book is not only a biography of, but also a love letter to Roddy's parents, Rory and Ita.