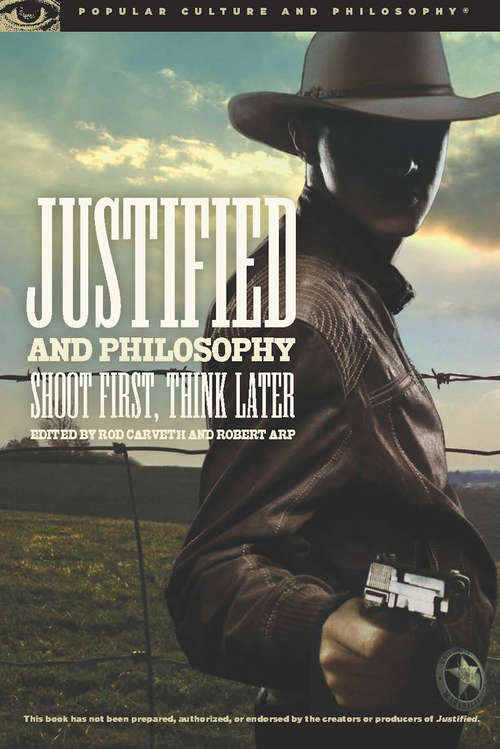 The sharp-shooting authors in Justified and Philosophy take aim at many of the same philosophical problems that the Justified TV series grapples with. For instance, is Tim Olyphant's character, Deputy U.S. Marshal Raylan Givens, morally justified in using his Wild-Wild-West-style vigilante tactics to clean up Harlan County, Kentucky? After all, the meth dealers, thieves, murderers, and other low-life scumbags all deserve what's coming to them, right? Not so fast, Quick-Draw McGraw! What about the law? What about a thorough and complete investigation of matters before dispensing so-called "justice"? What about the idea of the punishment fitting the crime?Deputy Marshal Givens wears a white hat and fights the "bad guys" so he must be a "good guy," right? His opponents are violent drug dealers, white supremacists, and thieves. Givens carries a badge, but when he shoots or kills people, is it always justified? What other choice does he have? Would any other method be as effective in rural eastern Kentucky where criminal activity is one of the few viable options for making a living?The coal-mining culture of Harlan County, Kentucky is an important backdrop to Justified, and the issues surrounding the coal industry are addressed in some chapters. Some of them include health problems like black lung, the dissolution of communities, the reduction in employment alternatives, the destruction of the environment with mountain-top removal and fracking, and the increase in crime and poverty. If Boyd Crowder robs the coal company responsible for exploiting his community, is that justified?The relationship between Boyd and Raylan dates back to a childhood friendship. Then when they older, they worked in the mines together. One chapter explores the character and motivation of both men and argues that each follows a different moral compass. Another chapter discusses the importance of family to the character of Mags Bennett and how that guides her actions and sense of duty. Another topic of discussion is whether the end justifies the means when Boyd and his gang destroy a meth lab and end up killing one of the meth cookers.Other chapters delve into a variety of fascinating philosophical themes that emerge in this modern-day cowboy show.