Making Out in Thai 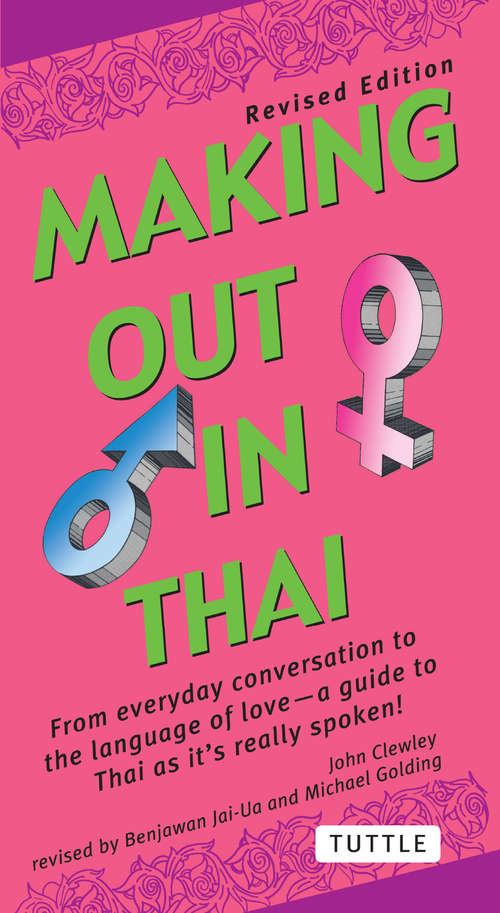 Making Out in Thai is a fun, accessible and thorough Thai phrase book and guide to the Thai language as it's really spoken.Dichan long nai tua khun! Ca phop kan iik muearai?--(I'm crazy about you! When can I see you again?) Answer this correctly in Thai and you may be going on a hot date. Incorrectly, and you could be hurting someone's feelings or getting a slap! Thai classes and textbooks tend to spend a lot of time rehearsing for the same fictitious scenarios but chances are while in Thailand you will spend a lot more time trying to make new friends or start new romances--something you may not be prepared for.If you are a student, businessman or tourist traveling to Thailand and would like to have an authentic and meaningful experience, the key is being able to speak like a local. This friendly and easy-to-use Thai phrasebook makes this possible. Making Out in Thai has been revised and redesigned to act as a guide to modern colloquial Thai for use in everyday informal interactions--giving access to the sort of catchy Thai expressions that aren't covered in traditional language materials. As well as the Romanized forms, each expression is given in authentic Thai script (akson thai), so that in the case of difficulties the book can be shown to the person the user is trying to communicate with.This Thai phrasebook includes:A guide to pronouncing Thai words correctlyExplanations of basic Thai grammar, such as, word order and polite vs. impolite formsA guide to male and female usageRomanized forms of words and phrases with tonal markingsComplete translations including Thai script (akson thai)Useful and interesting notes on Thai language and cultureLots of colorful, fun and useful expressions not covered in other phrasebooksTitles in this unique series of bestselling phrase books include: Making Out in Chinese, Making Out in Indonesian, Making Out in Thai, Making Out in Korean, Making Out in Hindi, Making Out in Japanese, Making Out in Vietnamese, Making Out in Burmese, Making Out in Tagalog, Making Out in Hindi, Making Out in Arabic, Making Out in English, More Making Out in Korean, and More Making Out in Japanese.