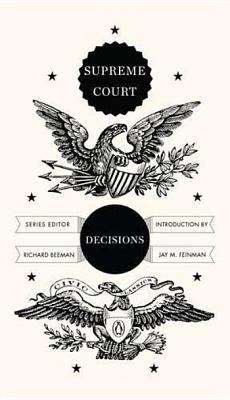 The Supreme Court is one of America's leading expositors of and participants in debates about American values. Legal expert Jay M. Feinman introduces and selects some of the most important Supreme Court Decisions of all time, which touch on the very foundations of American society. These cases cover a vast array of issues, from the powers of government and freedom of speech to freedom of religion and civil liberties. Feinman offers commentary on each case and excerpts from the opinions of the Justices that show the range of debate in the Supreme Court and its importance to civil society. Among the cases included will be Marbury v. Madison, on the supremacy of the Constitution and the power of judicial review; U.S. v. Nixon, on separation of powers; and Hamdi v. Rumsfeld, a post-9/11 case on presidential power and due process.